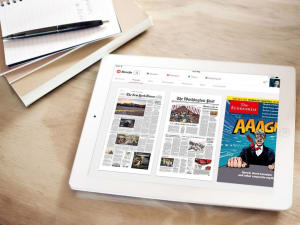 US Publishers test micropayments
A new startup, Blendle, has launched in beta in the US today, pushing micropayments for articles, as publishers begin to look for new ways around the ad-blocking threat. Big name publishers like The New York Times, The Washington Post and The Wall Street Journal have all signed onto the platform, testing 19 to 39 cent payments for articles. While micropayments have existed in the publishing world previously, Blendle is notable for allowing customers to ask for a refund, if they don’t like the story they have paid for.

Vice's Shane Smith is Cannes' media person of the year
Cannes Lions has named Vice founder Shane Smith as the 2016 Media Person of the Year. Philip Thomas, CEO, Lions Festivals says: "Shane is an influential figure in today's media landscape. Not only is he responsible for taking Vice, which started life as a punk magazine, expanding it to become the world's leading global youth media company, but also, beyond this, he's a critically acclaimed journalist."

After two and a half years, Aldi has closed its online liquor store. The challenger supermarket brand flagged its intention to close the online store in February, with Aldi stating at the time that due to its expansion plans to South Australia and Western Australia it was throwing its resources behind those pushes. The closure doesn't effect its liquor products in store.