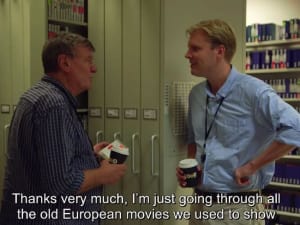 An awkward recruitment video from the Department of Finance, dubbed as the worst government ad, has been parodied by SBS show The Feed.

The original spot, by Together Creative, was slammed by Australians and industry execs as “boring as bat sh*t”, “atrocious” and “truly terrible”.

While the Department of Finance’s video references “paleo pear and banana bread” and “Aboriginal and Torres Straight Island staff network meetings”, SBS has taken it one step further, parodying the ad and itself in one glorious recreation.

And if you missed that SBS Recruitment ad, you can take ya drug of choice (diversity) & watch it right the heck now https://t.co/Kz7EP2p30U pic.twitter.com/KGSHn6A5ep

The two minute video, filmed at the SBS’s Artarmon headquarters, follows The Chaser’s Mark Humphries around the office while taking a swipe at the network ratings as well as its new channel Viceland.

In the first scene a woman says she is heading to the cafeteria for some “paleo gluten free baklava".

Playfully teasing its own scheduling, one staffer asks Humphries if he watched the latest Hitler documentary the night before.

In another scene, an older man says: “I’m just going through some of the European videos we used to show... You don’t see bush like this any more!”

In the final scene two employees then discuss whether they are going to the ‘heroin and crack cocaine party hosted by Viceland tonight.”

The star of the show in the blue shirt then declares: “I won’t be doing any heroin or crack cocaine, my drug of choice is diversity.”