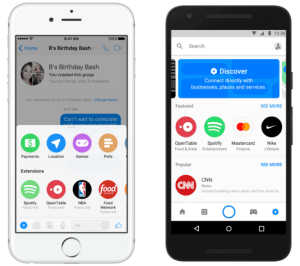 Facebook Messenger users globally will soon start seeing more ads. After “promising” tests in Australia and Thailand, Facebook is expanding the Messenger ads beta further, allowing businesses around the world to target people with ads via Messenger. More than 1.2 billion people use Messenger every month, which it says, gives marketers an opportunity to expand the reach of their campaigns and drive more results. Australian department store David Jones used the offering, with its GM marketing and communications, Michiel Tops, saying the Messenger ads have been a “powerful addition” to its digital advertising campaigns. The news means people will see Messenger ads in the home tab of their Messenger mobile app. When they tap on an ad, they will be sent to the destination chosen during ads creation. 'Sponsored Messages', delivered directly to a person a business has an existing conversation with in Messenger will also be available – as will 'Click to Messenger ads', when a person clicks or taps on a business's ad in News Feed, Instagram or Messenger a conversation with the business will immediately open in the Messenger app (if the person is on a mobile device) or on the web (if the person is on a desktop computer).

Southern Cross Austereo (SCA) has appointed Will Allen as national head of TV sales. Leading SCA’s television sales team, together with National Executives, he will develop and oversee SCA’s television sales strategy to maximise revenue in the short, medium and long term. His first role with SCA was in 2007 running the Brisbane sales function across radio and television assets for SCA’s regional businesses.  After time in the media agency world he returned to SCA in 2012 to become its head of sales in Brisbane.  He will continue this role in addition to his head of national TV sales role and will report to chief sales officer at SCA Brian Gallagher. SCA says its regional television business reaches almost 40% of Australians.