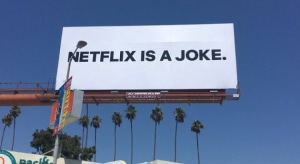 A Netflix billboard from one of its publicity stunts last year

Netflix added an additional half a million New Zealand users over 2017/2018 and is now approaching the two million mark.

The New Zealand market for the SVOD service rapidly approaching the two million threshold, overtaking Sky TV in the process.

This factors heavily into the 13.9% growth experienced by the Pay TV sector as a whole, with figures from the latest financial year showing three million New Zealand households now have access to at least one form of Pay or Subscription TV.

Sky TV experienced the slowest growth at just 1.7%, to pass 1.6 million users, but its affiliate Neon contributed heavily to this with 190.3% growth to 295,000 total users.

“In a changing media landscape the impressive performance of SVOD shows there are avenues to growth for incumbent media businesses challenged by new entrants into the market. Sky TV’s fast growing Neon SVOD service is a prime example of an existing media company adapting to the changing consumer habits of New Zealanders,” she says.