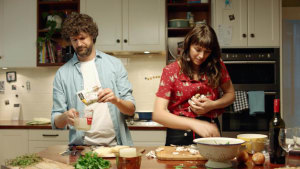 Locked in a battle with an increasingly fragmented market, as well as growing competition from food delivery services, Nestlé has developed a new sub-brand strategy as a means to develop a foothold in the lucrative millennial market.

Nestlé ANZ head of marketing foods Tracy Hardwick says the company continues to face the challenge of engaging with the millennial market, going up against an audience with a dwindling interest in home cooking.

As part of the company's latest campaign for long-time staple brand Maggi, Nestlé has created a new sub-brand, Marketplace, designed to compete with the growing wave of at-home food delivery services such as Uber Eats and Hello Fresh.

Harwick says there has been a "seismic shift" in the category, which has led to Marketplace, a new youth-focused brand of sauces and meal creation products which have been designed to inspire more home cooks in the under 35 demographic.

"The fragmentation is incredible, as we have traditional competitors to this brand such as Masterfoods and Continental but actually, we're competing against anything in the supermarket that you would use to make and eat for dinner," she says

"Then there's the deliveries and takeaways, Ubers, Deliveroos, all those guys, so the explosion of all of that has made this a hugely competitive and fragmented category, so everything's harder. Your competitive set is just so much bigger."

Hardwick says Maggi, which consists of noodles and cooking sauces, needed to go back out to the market with a brand repositioning that spoke directly to the shifting food habits of millennials.

It's led the push with the realise of two 30-second TV spots, created my Marcel Sydney to reinforce the fun and pride that comes with cooking at home.

At the last read, she says the brand was in 20% of households in Australia which Nestlé says is pretty substantial, but its wants to continue grow that figure, particularly within the younger under 35 audience.

Hardwick says its also about "smacking away" the smartphone, as more of the market are focused less around cooking food and more about using social media to share snaps of food created for them.

"The campaign is trying to position us from a point of explaining the benefit of making it yourself versus getting it from a takeaway or out at a cafe," she says.

"That’s a struggle but I guess really, that is what we're trying to do - get the phone out of the hand, make people inspired to cook again by showing them how easy and how fantastic the food looks."

However, Nestlé isn't afraid to start taking cues from its competitors, particularly when launching new sub-brands such as Marketplace.

Hardwick says the brand can see the importance of framing new product lines around the growing trend of "health and wellness", which many smaller startup and online only food brands have made strong growth out of adopting.

"We obviously can't be that because we have a heritage, and this is who we are, but we definitely have to take what's really important from those brands and see how we can weave that into our brand and our strategy in a really authentic way, in the way that makes sense for us."

The brand has made a point of heroing the fact that the new Marketplace products include 100% all natural ingredients, as well as the four health star rating each product has.

Most recently, Nestlé Oceania appointed UM as its media agency in Australia and New Zealand for the Nestlé portfolio of brands, managing its $50 million media account.

The account will be handled by an entity known as Mediabrands Thrive-UM.

The appointment follows a competitive review process and concludes Nestlé’s three-year relationship with MEC / Wavemaker in Australia and Mediacom in New Zealand.