Nestlé marketer on Kit Kat and the nature of "breaks" 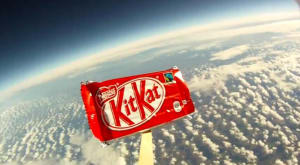 This story originally appeared in the latest issue of AdNews magazine, you can get a copy in Print or on your iPad right now.

If you were to poll the global public on the most renowned brand taglines that spring to mind, chances are “Have a break, have a Kit Kat” would show up somewhere on that list.

The tagline, the brand’s most seminal piece of advertising, was coined in 1958 for its first television commercial and it hasn’t changed since.

Not many brands have that heritage for a brand slogan - but if it ain’t broke don’t fix it - so there are no plans to change.

But as the brand reaches its 80th anniversary, Nestlé Australia head of marketing, Chris O’Donnell, who runs the brand’s advertising, tells AdNews that while the tagline is here to stay, the brand obviously needs to evolve with the consumer.

So while not much has changed with the bar, or its messaging, Nestlé is trying to change the way it does things.

It now invests close to half its total marketing budget in digital and experiential, according to O’Donnell, while around 55% is still in TV.

Since 1935, when Kit Kat was born as a chocolate bar that “a man could take to work in his lunchbox”, the nature of work breaks has changed.

“‘Have a break, have a Kit Kat’ has been around forever and it’s one of the most recognised taglines in the country, so certainly for us it’s about continuing to reinforce that,” O’Donnell says.

“But we do recognise that consumers’ breaks are changing. The traditional break of everyone stopping at 11 o’clock and sitting down together and talking about what happened the night before has changed. Consumers are a lot more engaged in digital and breaks are fluid. There are no set times any more.”

That means the brand has to find a way to tap into those breaks people don’t know they’re even having, like watching a YouTube clip at work, or enticing consumers to actually take a break and to have a Kit Kat with it.

And as downtime continues to change, so does the way that Kit Kat can work to engage consumers. O’Donnell revealed that earlier this year, Nestlé created a program where roughly 50 startups in Australia were engaged to answer a brief on Kit Kat, with two handpicked to work on the brand.

O’Donnell remains tightlipped on the specifics of the work the startups were doing, as both are still in pilot stage, but says they were designed to enhance “the break experience” and that both projects will be out by the year’s end.

“It’s leveraging technology and new ways we can engage with consumers,” O’Donnell explains. “It’s also a different way of thinking for us as a marketing team; finding new ways to cut through.

“The role of traditional advertising is fundamentally going to change over the next couple of years. What we’re looking to do is be a lot more disruptive and find ways to cut through and engage with consumers.”

The other way that Kit Kat is looking to disrupt is right here in the physical world. The core pillar of its 80th birthday strategy was the launch of Kit Kat Studio; a worldfirst Kit Kat concept store where consumers were invited to create a bespoke Kit Kat flavour at a pop-up in Sydney’s Pitt Street Mall.

The studio included 58 different ingredients to customise the chocolate bars and a tie-in with pastry chef, Anna Polyviou, from Sydney’s Shangri-La Hotel.

No doubt inspired by Unilever’s successful Magnum Pleasure concept that has been allowing people to design their own Magnum ice cream for the last few years, it’s a nod to bringing people into the conversation.

“We wanted to do a world-first – this hasn’t been done for Kit Kat anywhere else in the world,” O’Donnell says.

“We really wanted to give our consumers the opportunity to recreate something that is quite distinct and quite unique to them.”

The experiential campaign also fed into the brand’s digital strategy. User-generated content through the studio was fed into Kit Kat’s social feeds using the hashtags #KitKatStudio and #createyourbreak and were broadcast back into the studio itself.

On the digital side, globally, Kit Kat has a partnership with Google that saw Android phones released with a ‘YouTube my break’ functionality built-in. And this year, the Australian arm of Nestlé launched its biggest digital campaign to date as part of its long running Celebrate the Breakers campaign.

It used well-known Australian comedians, including the likes of Dave Hughes, Tim Rosso, Scott Dooley and Em Rusciano, to create 20 individual pieces of digital-only content on ‘how to spend your break.’ The best performing pieces received additional investment to amplify them online.

“Consumers aren’t interested in seeing a direct replication of a TV ad in a digital environment, so we created distinct,
bespoke content only for digital,” O’Donnell says.

“Kit Kat is really about delivering a winning sense of humour and that really becomes the expression of the tone, which is why we’ve engaged with some of the top comedians in the country.”

Going forward, O’Donnell says innovation is definitely on the cards, with his marketing team committed to looking at new ways of engaging the consumer in a fragmented landscape. This includes product innovation, but he says Kit Kat’s heritage is always front and centre.

“When I look at the portfolio on Kit Kat, the four finger bar that has been around for 80 years is still the most popular part,” O’Donnell says.

This story originally appeared in the latest issue of AdNews magazine, you can get a copy in Print or on your iPad right now.