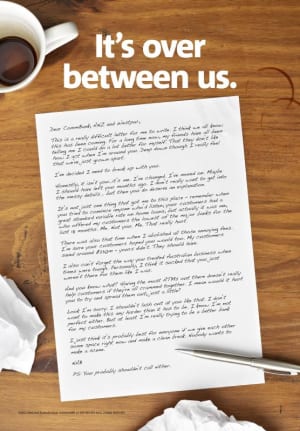 National Australia Bank (NAB) has a couple of gaping holes at the top of its marketing department after its CMO, Sandra de Castro, and its GM brand and products marketing, Kevin Ramsdale, both resigned from the business.

The exits occurred over the last couple of months and while Ramsdale is set to take on a position as marketing director at JB Hi-Fi in September, it is unclear what de Castro's next move is.

Both had been at the company for about five years.

The campaign, created by Clemenger BBDO Melbourne, aimed to separate NAB from the other big three banks and the push was led with a full page “breakup letter” in print newspapers. The letter said: “Dear CommBank, ANZ and Westpac ... I’ve decided I need to break up with you ... I’ve moved on ... NAB.”

The marketing war between the big banks soon escalated, with CommBank rolling out a tactical campaign in direct response to National Australia Bank's provocative "It's over between us" activity.

The CBA campaign was then led by a full page newspaper advertisements and a website, with the line: "Don't get nabbed". The website address even featured the pun "nabbed" in the URL.

A NAB spokesperson said: “NAB can confirm that Sandra de Castro and Kevin Ramsdale recently resigned from our Marketing team. During their time with NAB, both Sandra and Kevin led the award-winning Break-Up campaign, which has had a significant and lasting impact on our business, customers and the industry. NAB wishes both well in the next stage of their careers.”

Nearhos' history shows him having taken on varying roles from GM of strategic marketing at Qantas, to head of customer strategy at IAG and a contract role as director of marketing strategy at News Corp.