CommBank hits back at NAB 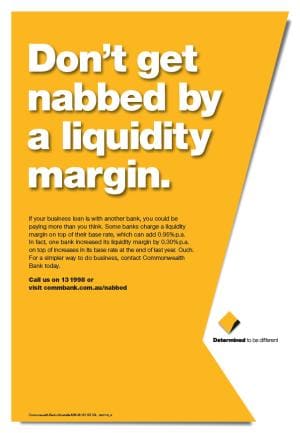 The marketing war between the big banks has escalated, with Commonwealth Bank rolling out a tactical campaign in direct response to National Australia Bank's provocative "It's over between us" activity.

The CBA campaign is led by full page newspaper advertisements and a website, with the line: "Don't get nabbed". The website address even features the pun "nabbed" in the URL.

The campaign is a response to NAB's post-Valentine's Day campaign, launched last week, which attacks Commonwealth Bank, Westpac and ANZ.

The NAB campaign saw the bank "breaking up" with its competitors through a series of print, outdoor, radio, experiential and online ads.

Elsewhere, Westpac has also unveiled its own response this weekend, with a print campaign that features the line: "Switch to Westpac, Australia's No. 1 business bank."