NAB hits out at rival banks 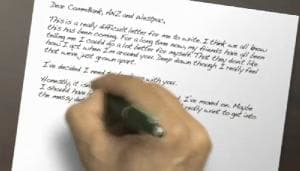 The campaign, created by Clemenger BBDO Melbourne, is called “It’s over between us”, and aims to separate NAB from the other big three banks.

It criticises the other banks for their mortgage exit fees, and promotes NAB’s offer to reimburse $700 to customers who switch to NAB from Westpac or Commonwealth Bank.

The push is spearheaded by a full page “breakup letter” in print newspapers. The letter says: “Dear CommBank, ANZ and Westpac ... I’ve decided I need to break up with you ... I’ve moved on ... NAB.”

The campaign is supported by outdoor, radio, online and experiential activity.

A teaser campaign was released on Friday night, with a NAB tweet that appeared to be an embarrassing mistweet, saying, “Sooooo stressed out. Have to make a tough decision and I know I’ll probably hurt someone’s feelings! Arrggghhh.”

Westpac was pulled into the ruse, tweeting “Hey @nab know the feeling”.

Media buying was handled by ZenithOptimedia.