Australians are increasingly using smartphones and tablets to watch their favourite programs as fewer hours each month are spent watching broadcast TV on televisions, the latest quarterly multi-screen report has found.

The average person spent just over 85 hours a month watching linear television in the final quarter of 2015, which is five hours less than the comparable period a year earlier. Playback viewing was steady at seven hours 20 minutes in a report that compares viewing data from OzTAM, Regional TAM, Nielsen and, for the first time, OzTAM's VPM.

The amount of time watching content on smartphones increased 154% to four hours and 18 minutes per month and online video on tablet jumped 147% to a touch over three hours a month, as illustrated by the chart below.

“The shift to devices is about more premium content being offered, better connection and data plans and that should continue to grow,” OzTAM CEO Doug Peiffer tells AdNews.

Aside from the 55 and over generation, live TV usage dropped across all demographics as TV sets are increasingly being used for other purposes, including video games and streaming services such as Netflix.

This shift was strongest in those aged 18 to 39, where other TV screen use increased by 0.6 TARP percentage points at the expense of live TV.

“You can see the usage of the television set, particularly if you look at teenagers, there is a higher proportion of using TV for something else and other devices. I've got one in my household and he's on everything,” Peiffer adds.

“For the older audiences, live viewing is a majority of what they do, but even they are starting to shift more on timeshift.

“Probably the biggest trigger to watch more television is having a child, because you spend more time at home ... but people are leaving having a child to much later in life and that's having an impact as well." 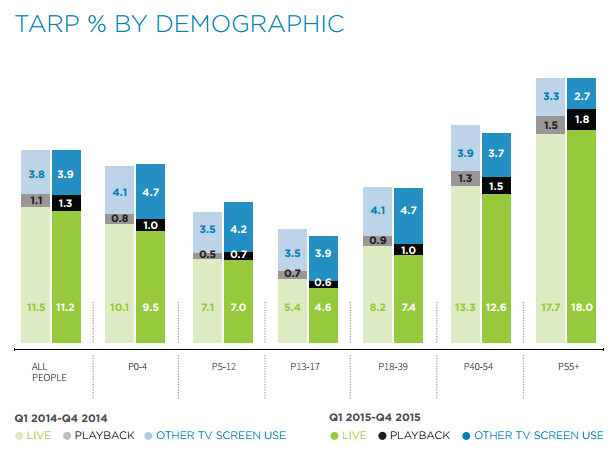