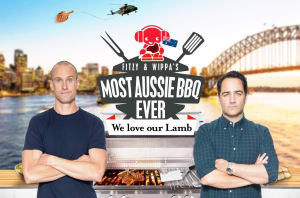 Meat and Livestock's (MLA) Australia Day campaign is in no way restricted to screens with the brand teaming up with Nova Sydney breakfast team Fitzy & Wippa for an integrated radio campaign.

The execution from the network's in-house creative team, Create, is designed to beef up the campaign created by The Monkeys which was released on Sunday.

It features a Nova first of sending Fitzy & Wippa to London, to broadcast their show live in the UK. While there, the duo are rounding up Aussies expats – like in the advert starring SBS presenter Lee Lin Chin – and bringing them to Australia, for the “most Aussie barbeque ever”.

Nova Entertainment head of creative services Andy Milne says the challenge for the network was to build momentum for the campaign with a lead time of 23 days, and without giving away the joke in the television commercial.

“When the client told us about the campaign, we needed to be able to run pretty heavily from 3 Jan to 26 Jan – that's all you've got. You've got 23 days to get a very clear message out to buy lamb and bring that idea to life on Nova,” Milne says.

“So the week commencing 3 Jan it was really about teasing the whole campaign, but obviously what we were up against was that there was an embargo against the messaging.

“What we needed to do was set up how Nova, nationally, was going to raise the creative idea without blowing the gag.”

To achieve this, Nova seeded an idea stemming from the fact that Australia Day will be on a Tuesday this year, with the presenters calling for Monday 25 to be an unofficial day off. To mark the occasion, Nova is hosting a party at Fort Denison in Sydney Harbour, with former 'lambassador' Sam Kekovich, celebrity chef George Columbaris and several unnamed Aussie music artists in attendance.

Milne says next week the campaign will continue with a consumer promotion where anyone in the world can be reunited with their loved ones in Australia and at the party on 25 January.

The campaign is the latest from Nova, which has steadily been ramping up its Create division since rebranding as an entertainment company rather than as a radio station.

Nova chief digital and marketing officer Tony Thomas told AdNews last year that Create is a key pillar in its content marketing strategy moving forward in what Thomas said is a “significantly growing part” of the business.

Milne says radio is not only cost effective from a client point of view, but activation work has been its “bread and butter” for the last 30 years.

“We're an agile business, we've adapted for the future because we're resourced in such a way where the overheads to produce great content aren't really there because its our bread and butter,” Milne says.

“We're equipped and we're used to getting briefs at the last minute and being asked to deliver something back in a short period of time. We've been doing this a long time.”