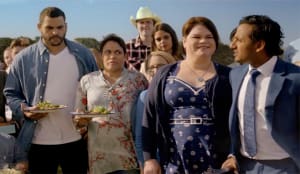 The latest Meat and Livestock Australia (MLA) spring lamb campaign has made headlines around the world for its modern reflection of the diverse Australian culture. But now the ad could be banned from television following complaints to advertising watchdog Advertising Standards Bureau (ASB).

The ad, starring Olympian Cathy Freedman, television presenter Luke Jacobz and other Aussie personalities, tackles the notion that there are a lot of the same faces being shown on TV screens and in advertising.

The Monkeys created the ad to reflect how the Australian population looks today and brings people from all walks of life together.

While the spot has been celebrated in the media, the ASB tells AdNews it has received around five complaints expressing concern over “discrimination on the basis of race”.

The MLA is no stranger to controversy, with its Australia Day campaign garnering more than 400 complaints for its “racial insensitivity” and displaying “violence” towards vegans. The ad was eventually cleared by the ASB despite the barrage of complaints.

A spokesperson from MLA says it is aware of the complaints received by the ASB and understand they relate to discrimination against white males. But ultimately, the campaign aims to celebrate diversity and the many faces of Australia.

“The spring lamb campaign is intended to be a celebration of Australia’s diversity. It demonstrates that all Australians love and enjoy their lamb, regardless of ethnicity, religious beliefs, sexual orientation, age or ability.

“The overwhelming feedback to this campaign from all Australians has been positive. We are extremely proud of the ad’s content and its celebration of all Australians and their love of lamb."

The MLA says it will address and respond to the ASB accordingly.