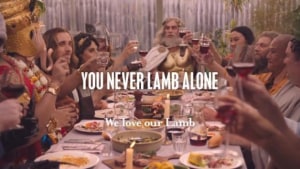 Despite significant backlash from the Hindu community, more than 200 complaints and an appeal to the Australian government, the most recent Meat and Livestock Australia (MLA) ad has been cleared by the ad watchdog.

Complaints against the ad, which features gods, goddesses, aliens and religious figures coming together over a feast of lamb, were dismissed by the Advertising Standards Bureau across free TV, pay TV and Facebook and the internet.

Most complaints were made on the basis of discrimination and vilification on the grounds of religion, with the Hindu community upset over the inclusion of Lord Ganesha.

One complainant said: "This a crude and offensive ad in a great multicultural society like Australia which will strong implications in future ranging from kids to people of all age who are Hindus as they may be bullied and mocked by this ad.

"It is hurting our religious sentiments by showing the Hindu god Ganesha as a meat eater and also making fun of the Hindu god."

MLA defended the ad, created by The Monkeys, saying there was nothing in the spot that promoted bigotry or intolerance.

"There is no express or implied connotation during the advertisement that religion is not accepted or acceptable, or that the dietary requirements or preferences of any particular religion should not be respected - to the contrary, the overriding message of the advertisement is religious tolerance and inclusiveness," the MLA said.

The ASB determined while some people take offense to the use of religious figures in advertising, it does not breach the code. It also views the ad as inclusive and noted that there was no discrimination present.

A minority of the board considered that the current advertisement makes a very strong association between a characteristic of an important religious figure and a product, lamb, that is contrary to those beliefs.

The minority of the board noted that it had previously upheld a complaint against a different advertiser about a radio advertisement which used music similar to the Muslim call to prayer to promote alcohol, but overall, ruled in MLA's favour.

"Following considerable discussion the majority of the board considered that the overall tone of the advertisement is light-hearted and humorous and in their view the intent is to be inclusive in a manner which promotes a harmonious and multi-faith environment," the board says, adding that not all Hindus are vegetarians and Lord Ganesha is never shown eating meat.

The MLA welcomed the verdict, adding: “There was never an intention to offend, rather we wanted to ensure that we were as inclusive as possible. To this end, those religions that don’t typically eat red meat are not shown consuming Lamb in the advertisement, but are still invited to the table.”

The company says the outcome reflects its ongoing commitment to responsible advertising.