MKR pulls in 1.5m viewers, but lowest ever finale audience 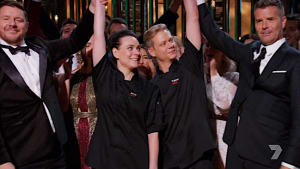 The show was split in two separate programs, first the 'grand final' and the 'winner announced' episode, lasting more than two-and-half hours.

The grand final brought in 1.39 million viewers while the winners announced segment saw an audience of 1.48 million, an average of 1.43 million. Last year's numbers were 1.8 million and 1.96 million respectively.

Veiwers were using #amytyson and #valeriecourtney as hashtags for the episode to show their support for the teams.

Meltwater, a media intelligence company which creates sentiment indexes based on online discussions, found an overall positive reaction to the finale online.

Ten's tentpole show MasterChef is premiering tonight in the 7.30pm slot. The reality cooking show – backed by Coles, Harvey Norman and Devondale – is likely to achieve strong ratings, bringing viewers back to Ten after a spate of low audience ratings.