MasterChef finale draws 992,000 for Ten as hosts prepare to depart 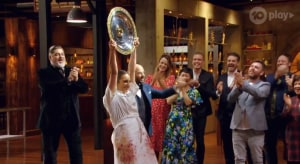 The finale, which saw 22-year-old Larrissa Takchi crowned the youngest MasterChef Australia winner, was down on last year's finale, which drew in 1.3m metro viewers.

The show was split into two parts, with the Winner Announced reaching 992,000 metro viewers, while the Grand Finale section drew in 831,000.

MasterChef, while consistently hitting the 700,000 and 800,000 viewer mark this season, has struggled when compared to primetime competitors on Nine, including Australian Ninja Warrior.

The Winner Announced defeated both Nine's Ninja, which drew in 887,000 metro viewers, and Seven's House Rules, which had 730,000 overnight.

This was also the finale for Seven Rules, which had also struggled in the face of Nine and Ten's tentpole programs.

In the overnight main channel battle, Nine took home the top spot, securing a narrow 0.3% victory over Seven with 21.6%, compared to Seven's 21.3%. Despite the victory in primetime Ten followed in third with 16.6%.

The MasterChef finale was also the last episode for its judges Calombaris, Preston and Mehigan, who were revealed to be exiting the series following a pay dispute with Ten.

Despite Ten claiming the cause for their exit was due to pay, questions have been raised as to whether it was likely to be a combination of contracts and the recent scandal surrounding Calombaris underpaying staff $7.8m.

Earlier this week, Tourism WA announced it would "pause" all campaigns featuring Calombaris. At the time, a spokesperson for Network Ten told AdNews, the broadcaster "stood by" the chef.

In addition to the backpay, Calombaris has been fined a $200,000 contrition payment to be paid to the Commonwealth Government’s Consolidated Revenue Fund.

Ratings could have also played a part in the decision with MasterChef's viewership slowing in recent years, with the 2019 debut only receiving 715,000 overnight metro viewers, down from 890,000 viewers the previous year. In 2017, it clocked over one million viewers.