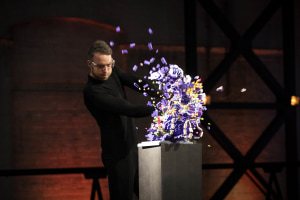 Nine's Lego Masters has knocked off another tent pole reality cooking show for the second night in a row, this time beating MasterChef's season 11 debut.

Lego Masters, which debuted on Sunday night to over 1.3 million viewers and beat Seven's My Kitchen Rules grand final, has once again secured the top primetime spot, this time drawing in 1.05m metro overnight viewers.

Last night the show, hosted by Hamish Blake, beat Ten's MasterChef, which debuted with 715,000 overnight metro viewers. The show was down over 150,000 viewers compared to last year's launch, which saw 890,000 viewers tune in.

This is the second year in a row that the show has failed to secure the number one prime time position on its debut night.

On Seven, House Rules, which also debuted alongside Lego Masters on Sunday night, was unable to pick up the tempo, shedding over 200,000 viewers overnight, with a total metro audience of 561,000.

Foxtel continued its ratings success overnight, with episode three of the final season of Game of Thrones reaching 982,000 on the main platform.

According to OzTam preliminary ratings, the episode, which ran for over 80 minutes and saw the long-awaited clash between the Whitewalkers and army of Winterfell, generated a video player measurement score of 377,000.

In the overnight main channel battle, Nine took a commanding lead with a 22% share, compared to Seven which came in second with a 16.7% share.

Ten returned to a double-digit share off the back of the MasterChef season debut, narrowly beating the ABC with a 13.6% overnight share, compared to the public broadcaster's 12.9%.

Tonight sees Lego Masters, House Rules and MasterChef all go head-to-head in the primetime slot, while Ten will push Bachelor in Paradise back to the evening slot.