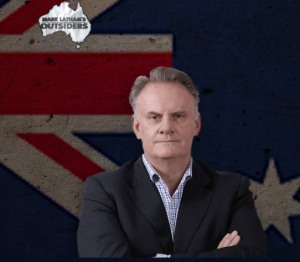 Former Australian Labor Party leader Mark Latham has launched a 'Save Australia Day' advertising campaign to combat those in favour of shifting the 26 January date.

Sydney-based Latham, who was leader of the opposition from 2003-2005 - leading the party to defeat at the 2004 Federal Election, believes the public holiday should remain on the 26th, despite many Australians disagreeing.

“It’s time to fight back and support the campaign to Save Australia Day."

By fighting back, Latham means with TV, radio and social media advertising “led by the inspiring Indigenous leader Jacinta Price” and he is urging people to donate to the cause.

Both Alice Springs town councillor Price and Latham want to use the donations to push the campaign further through advertising.

There is controversy around the Australia Day holiday as some say its association as Invasion Day means it excludes many Australians. Last year Meat & Livestock Australia's summer advert addressed the issue and ABC youth station Triple J moved its iconic Australia Day Hottest 100 in light of concerns.

Latham's new ad campaign includes a two-minute video clip depicting a fictional and somewhat Orwellian future where people are too scared to celebrate Australia Day for fear of judgement and backlash.

Backed with sinister sound effects, scenes show a fearful mother shredding her daughter's 'Happy Australia Day' artwork; a woman in the butcher whose mood quickly changes when questioned if the lamb she's ordering is for Australia Day, and a couple of elderly men reprimanded by a care home nurse for celebrating the day with Aussie flags and a lamington cake.

The ad has already pulled in nearly 80,000 views

While some are calling the new campaign a “pathetic and desperate” cry for attention, others praise the movement and are putting their hand in their pockets to donate.

“Whoever made that ad is seriously unhinged”, said one Facebook user, while others said the video was “paranoid and divisive” and “hilariously bad”.

“To the advertising agency. Can we please have an ad that will appeal to the absolute dumbest people in the country. Thanks,” another remarked.

One Facebook commenter said: “Inaccurate, derivative, fearmongering nonsense. It would be nauseating if it weren't so absurdly hilarious (much like Mark, really). And given Australia Day wasn't a public holiday until 1994, I assume those old-timers are remembering the good old days when they had to go to work on January 26?”.

Mark Latham's Outsiders were quick to respond to this comment by saying: “Governor Macquarie made 26 January a public holiday in 1818 - 30th anniversary of settlement. Get your facts right before mouthing off.”

Since his mid-40’s he’s been on a generous pension (guaranteed for life) & yet he’s still asking the public for more money. Its all about Latham trying to make himself a hero at the public’s expense. Pay for my “Latham saves Australia Day” campaign he begs. How sad.

Fucking hilarious! Which of Skid's sycophants will put his short arms in his long pockets to pay for this woeful ad? Anybody?.......Anybody?..... Bueller?

Despite the backlash many are backing Latham and Price, calling the crusaders “legends”, with some saying the ad is “awesome and great”.

“It will never be changed - I will always celebrate it on the 26th Jan. Oh by the way, if I offend anybody that’s awesome because trying to change this day offends me,” one Facebook commenter says.

Another said: “It's still going to be Australia Day no matter what day... which means our celebration will still be about Australia... nothing will change. Keep it the way it is.”

“A bit over-dramatic with the advertisement, but I understand the threat from the totalitarians on the left.” 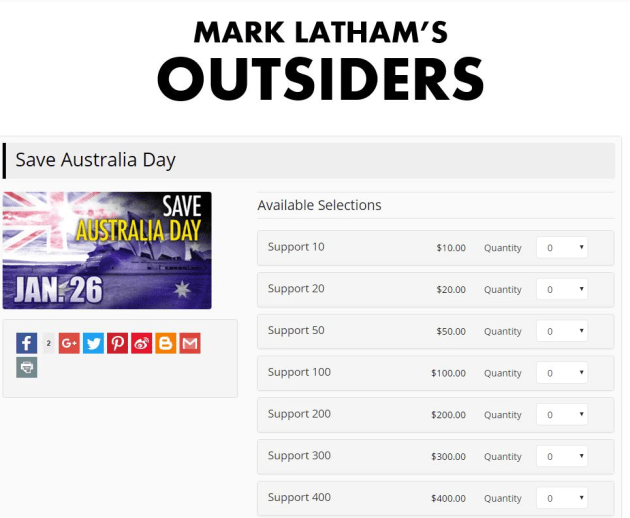