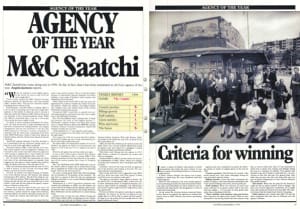 As M&C Saatchi Australia prepares to turn 21, we talk to CEO Jaimes Leggett about history, coming of age, and why the currency of creativity is more important than ever.

M&C Saatchi opened its Sydney office in 1995, operating out of a hotel room. Now, the agency is on the brink of celebrating its 21st birthday with a 400 strong-staff, two offices across Sydney and Melbourne and 10 different business units under the M&C Saatchi umbrella. Not to mention a spate of awards from across its two decades of operation.

But if you ask CEO Jaimes Leggett if M&C Saatchi has come of age, he’ll tell you what the agency is celebrating is consistency.

“It plays out a good story about consistency. Consistent good work and good people over 21 years, which I think is quite a rarity,” Leggett tells AdNews.

To celebrate, the agency is holding a birthday party in Sydney's Surry Hills on the 21st of this month. It’s also launching a coffee table book designed to showcase the body of work the agency has produced over the past 21 years since its inception in Australia just weeks after Maurice and Charles Saatchi were famously ousted by Saatchi&Saatchi, the agency they founded in the 70s.

The coffee table book was created by the M&C Saatchi Sydney team and also lists all staff - current and past and the awards the agency has won over that time. It comes vacuum-packed like a time capsule and will be given to current clients and staff as well as other key contacts that M&C wants to get in front of. It’s an impressive tome and doesn’t look cheap to produce, but Leggett wouldn’t be drawn on exactly how much.

“It’s a chronology of some of the iconic work that’s come out over the years. It’s as if we we’re talking through our history, the work, how it came about and why we did it and the things that were happening in culture at the time. Twenty years ago, the world was a massively different place and the work that was written then and the humour and the tensions that exist in society now are very different," he explains.

“We’re talking about big culturally relevant stuff and stuff that changed Australia – [M&C] is some of the biggest brands in the country, producing some of the biggest advertising that has the ability to effect change. That’s why we do what we do – we work in advertising because we believe creativity can change the world and advertising is our canvas. Without being too ethereal about it we want to do things that move things forward.”

Back in the day, Tom Dery, now global chairman of the network, opened M&C Saatchi’s Sydney office and was put on deck to serve foundation clients Qantas and British Airways. Within 18 months, the agency had 14 clients, 39 staff and a creative director in the form of Tom McFarlane. It also secured its first award during that time, winning AdNews Agency of the Year in 1996. It also appeared on the front page of the 13 December 1996 issue (pictured).

(Don’t forget there’s a few days left to enter the current AdNews Agency of the Year Awards and make it part of your agency’s future, and history. Details here) 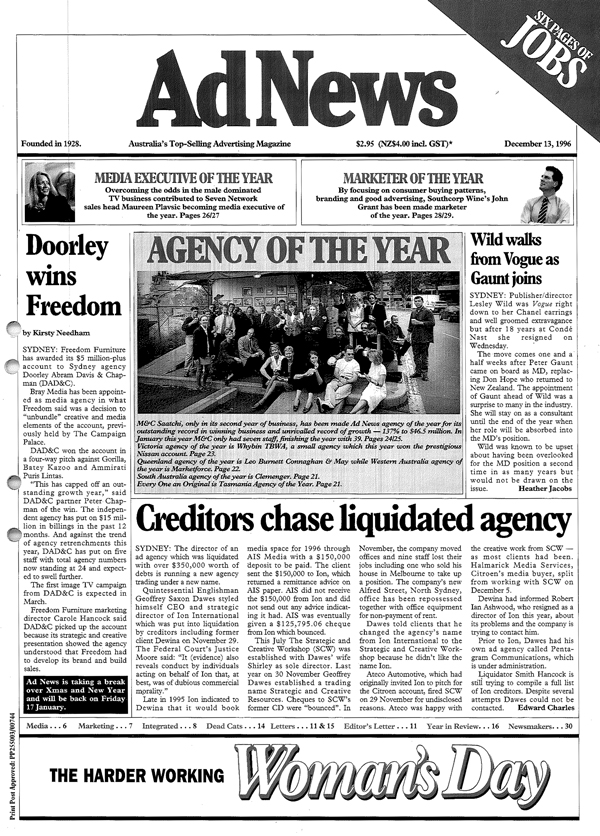 Five people pictured back then are still with the agency: Tom Dery, worldwide chairman, to the right of centre; Tom McFarlane, regional creative director, four to the left of Dery at the back; Lee Roberts, creative director of Make, fourth from left wearing sunglasses; Paul Taylor, ECD of M&C Saatchi Melbourne, third from right of Dery wearing black; and Rod Young, in white pants.

“We were very fortunate in Australia to have such fantastic support from the leadership group in London who backed us on everything we wanted to do from the outset,” Dery says.

“Plus the association with Maurice Saatchi was inspirational. The first 21 years were great but such is the leadership, the talent and the ambition around the place now, I’m absolutely confident the group will reach new heights as we go forward.”

However, the path hasn’t always been rosy for M&C Saatchi. In 2011, the agency lost a number of accounts including Woolworths, Qantas and ANZ banks, with Dery admitting to AdNews at the time it had been “a horror show”.

Shortly after, Leggett was brought in from Ogilvy and Mather UK to change the tide for the Australian arm of the network; a feat most in the industry say he accomplished.

Dery called it a “watershed moment” for the agency, which was in the midst of something of a slump.

Since then M&C Saatchi has evolved adding customer relationship business Lida in 2014, and a social division and innovation hub, Tricky Jigsaw, with Ben Cooper at the helm.

Tricky Jigsaw was responsible for the agency’s “Clever Buoy” work with Optus, which saw the creation of the world’s first shark detection buoy. The project picked up a number of awards at the 2015 Cannes Lions including a Titanium Lion.

More recently, the agency has picked up a stack of accolades including a 10-Lion haul at Cannes and a second place ranking on BRW’s Most Innovative Companies List in 2014.

But what of the future? Can M&C Saatchi continue its hot streak? This year has already seen one of the agency’s biggest clients, Optus, reshuffle its creative account, including another five agencies – in addition to M&C Saatchi – on its roster.

The speculation in the market is that it’s a blow to the shop but Leggett is confident the agency will continue going from strength to strength. After all, six agencies being on a roster doesn’t mean the business is split into six equal parts.

The next big milestone is to achieve his vision of the agency being the most creative company in Australia by 2020.