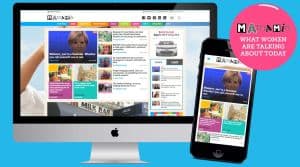 Mamamia is currently looking for an editor in the US to take the brand to the States, AdNews understands.

The Mamamia Women's Network was advertising the position on LinkedIn, with the role to be based out of New York.

The news comes as the group appointed Danika Johnston to take on the newly created position of national sales manager.

Most recently the group launched a site aimed at women over forty, Debrief Daily.