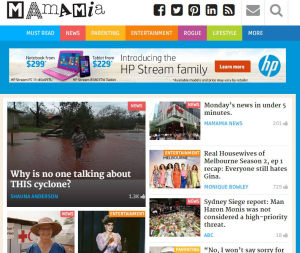 The newest site in the Mamamia Women’s network, Debrief Daily, is set to launch on 21 March, with current head of editorial for Yahoo7 Australia and New Zealand, Annie Markey, joining the team to edit the website.

Debrief Daily is aimed at women aged 40 through to 60 and has been in beta testing for the past few months, however national sales director for the Mamamia Women’s Network, Kylie Rogers, told AdNews that the launch is highly anticipated by both readers and advertisers.

“It was a priority for us some time this year to launch this site, but once we announced the site at the roadshow last year we had overwhelming interest from an advertising perspective and from our readers. All of our data showed us there’s nothing like this out there, so we brought it forward,” Rogers said.

When it comes to advertisers, Rogers wouldn’t reveal just yet who has signed up to be launch partners, however, she said that there would be an advertiser owning each of the six verticals by the time the site goes live.

“We genuinely have enough interest to lock six away before launch,” she said. “Everything from FMCG, to telecommunications, to retail, or automotive - and insurance is a hot category, so we’ve tried to accommodate everyone.”

“There are a couple of advertisers talking to us about working across the site, and as long as it doesn’t effect the others who own the verticals, we should be able to accommodate that.

“The others are happy to own health and beauty, or own finance, and to build great native content, both from a podcast perspective, from a written perspective and our Daily Debrief TV opportunities, so they can really talk to these women in an authentic way.”

Earlier this month AdNews revealed that the site would be launching as planned despite publishing powerhouse Bauer Media launching legal action against Freedman over the name of the site. Rogers explained that with the court case out of the way everything is moving forward quickly.

“We obviously had the hurdle of Bauer and that fell in our favour, so we’re on track to deliver and we’re delivering for a March 21 launch.

“We have an amazing editor, amazing contributors that are going to deliver absolutely what these older women want, and a site that talks to them in a real and engaging way,” she said.

Contributors announced at the launch include foreign minister Julie Bishop and shadow health minister Tanya Plibersek, who will both write for the site fortnightly.

As well as taking Debrief Daily to market the Mamamia Network also released its latest data, which focuses around what women want. This time the network surveyed 5000 women, as well as their own mothers, in order to find out how women over 40 respond when it comes to content, as well as advertising.

The study discovered the following messages when it comes to women over 40: Don’t ever mention her age in your communication with her; don’t ever confuse her with her mother; her time is now; milestones shift her world view, so know what they are; she is an optimistic preventer and finally she’s sending you as SOS, (she’s Smarted, Offended and Sceptical), so please listen.

The study provided tips for marketers who want to take these finding and apply them to their advertising collateral, they are: Acknowledge she exists; don’t be ageist; authentically re-imagine who she is; engage her mind; shift with her as her own mindset shifts and reflect diversity back to her.

The launch last week was the first time advertisers had seen the research and from conversations on the day that Rogers had, she said they were receptive to what the data had to say.

“I have no doubt that the research will be received very strongly and positively, certainly just talking to many of our clients after the presentation today, they’ve said this is so very reverent," she said.

Rogers said that there is such an opportunity for marketers to really connect with the 40+ age demographic because in the past so many haven’t listened to what they want, and those that do are seeing the benefits.

“It’s unbelievable the amount of women who said I ignore this (advertising) because they speak to me the wrong way, they always reference my age, or they try and portray me as a 45 year old, I don’t need that in my life.

“They have to have a good reason for their spend. If you do position your communications in the right away and you do talk to them in the right way they will spend with you, because so many are doing it wrong, the few that are doing it right are getting their money, so that’s the opportunity.”