Mamamia expands into sport and auto; doubles video content for 2017 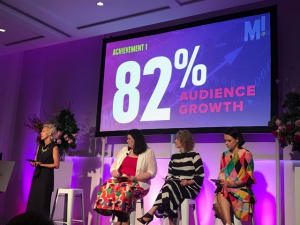 Mamamia is expanding its content verticals to cover automotive, sports, finance and travel as the publisher moves to celebrate women in 'non-traditional' spaces.

The women’s media company revealed its 2017 plans at its Women's 360 Newsfronts in Sydney this morning.

Mamamia managing director Kylie Rogers says research shows 60% of women are interested in sport and there’s a huge opportunity to lend a female lens to sport.

“We want to be a truly generalist site and when we looked at our content areas, we realised there was a huge area for us to invest in sports, auto, sports and travel," she says.

“Most media companies think that women aren’t interested in these areas – that these are the domains of men. Only 7% of media is designated to women’s sport and that’s not good enough."

Women’s professional sport has been gaining prominence in the past year with the success of Australia’s women’s rugby at the Rio Olympics, as well as professional competitions being launched or expanded in cricket (WBBL), AFL and netball.

However, media coverage hasn't matched its on-field trajectory. Earlier this year, SBS launched a female sports website, Zela, but pulled the plug on its funding in August.

As part of the expansion into sport, Channel Nine presenter and sports reporter Sam Squiers will come on as a contributor.

“The breadth of coverage will be dynamic," Rogers says. "We’ll cover major sports and games, profile athletes that resonate with women, and you’ll also see us tackle sports from the grassroots up, reflecting the role women play in community sport across the country.”

For its auto vertical, Mamamia will be partnering with CarsGuide to produce at least 10 pieces of content each month. It has also teamed up with MotorWorld, which allows potential customers to test drive cars, to sponsor its upcoming Ladies Day event.

Mamamia founder Mia Freedman says other media companies aren’t communicating with women in ways that reflect who they are today.

“Mamamia understands women in ways that other media companies are struggling with. We treat them as a person, not an appendage,” she says.

“High profile women have been pushing back on the boundaries that are excluding them. In 2016, women are demanding conversations to happen in the mainstream and we can see this through the moments that captivate, such as the gender debate in the US election.”

Broad social researcher Tegan Gilchrist said a "narrow focus" on the definition of women has previously impacted perceptions about their likeliness to spend in certain categories. This provides an opportunity to expand into these areas editorially and commercially.

The editorial initiatives (above) provide the opportunity for brands to come on board and Mamamia to further its push into branded content.

Freedman tells AdNews that branded content is the "future of advertising" and the company explains to every advertiser to be the content, rather than disrupt the content.

Former magazine editor Wendy Squires comes on board at Mamamia as the travel editor. She has previously held roles at Pacific Magazines, Nine Entertainment and News Limited. To launch the travel vertical, Mamamia will partner with flight search engine, Skyscanner.

Last year, Mamamia eyed podcasts, video and an expansion of its audience as it migrated The Glow, Debrief Daily and The Motherish under one masthead.

A year on and Mamamia says it has reached its targets, growing audience by 82%, the podcast network by 505% to seven million downloads, and pumping out more than two million monthly video streams. It also completed its one-brand migration earlier this year.

Mamamia has doubled its video team as its ramps up content

The publisher plans to double its video content to provide 100% more pre-roll inventory for advertisers. It is expanding the entertainment side of the business by restructuring its staff into two teams; news and entertainment. Rogers says this will allow more resources to be pumped into its video and podcast arms.

Mamamia aims to generate 40 million streams on the site next year. It will also launch seven more podcasts, including Love Life with The Bachelor Australia host Osher Gunsberg.

“Women have an insatiable appetite for this medium and we are looking at how we can own this space not just in Australia, but globally,” Rogers says.

Mamamia also plans to increase bespoke podcasts for brands. It has already created podcasts for Foxtel and is working on a podcast for law firm Maurice Blackburn.

Freedman adds: "We are a well oiled podast making machine which puts is in a good position to make content for brands."

With Mamamia “owning women’s ears” in Australia, it plans to expand its podcast network to its US publisher Spring Street.

"The medium is so intimate, with listeners feeling a connection with hosts. It's different from any other medium and listening to our podcasts is like having a conversation with your girlfriends. It's a great activation for listeners but also for brands – it provides a truly unparalleled opportunity for brands," Freedman says.

Data continues to be a driving force for Mamamia. To capitalise, Mamamia has struck a deal with demand-side platform TubeMogul that allows it to use first-party data to target audience segments outside its website.

The publisher has created its own campaign reporting tool Athena, which will combine data from the site, social, EDMs and podcasts into a single dashboard in real time.