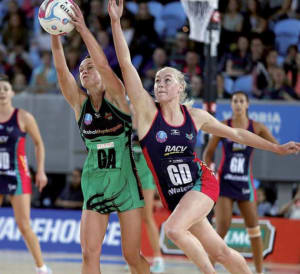 Elite women’s sport is starting to break down gender stereotypes and barriers that have traditionally held back investment in the game of netball.

This month, Netball Australia signed a recordbreaking broadcast rights deal with Nine and Telstra that will not only increase the number of games shown live on free-to-air television, but will place netball in a prime time slot on Saturday evenings.

As part of the deal, the ANZ Championships will do away with its New Zealand component, replacing five Kiwi teams with three new franchises from Australia.

Interestingly, preferred bidders are from AFL clubs Collingwood and Greater Western Sydney, and NRL club Melbourne Storm, which would help these already strong sports franchise brands to extend their reach.

The decision has turned heads from some quarters in the sports community that lauded the unique trans–Tasman format, but it was made to drive TV audience figures and make it more attractive for TV networks. At present popular ANZ championship games attract between 150,000 and 200,000 viewers.

“What we know from a broadcast perspective when you look at the numbers is that Australian fans are more interested in watching Australian teams and create the cross–town rivalry and tribalism within the country,” Netball Australia deputy CEO, Marne Fechner, explained, adding that the hugely popular rivalry between

Australia and New Zealand at international test match level fails to trickle down to club level.

For the past couple of years, women’s sport has been touted as “the next big thing” in sponsorship circles, but now investors are getting involved in far more meaningful ways, Tony McKay, head of strategy at MKTG Sport and Entertainment said.

“Women’s sport has gone through this significant change in perception. It used to be, from a brand and sponsor point of view, that they’d get behind it for two reasons – we want to target women or we want to be seen to be doing the right thing; a bit of that corporate social responsibility (CSR) to support a sport that doesn’t get a lot of other funding,” he said.

“Both of those now are totally dismantled as marketing mechanisms. You don’t get into women’s sport because you want to reach women. You do it because it is compelling content, people are engaged, passionate and is what sports sponsorship at its best is all about.

“Netball will prove to millions of Australians that it’s not women’s sport – it’s just great sport.”

For netball, Nine’s commitment is literally a game-changer, with brands already lining up to find out how they can become involved in the sport.

“The biggest change I’ve seen with netball over the past decade is that we are now partnering with multinational brands that have sponsorship as a core part of their marketing portfolio,” Fechner revealed.

Netball’s new rights deal with Nine and Telstra is further evidence that women’s sport is being taken seriously outside of the stereotyped female fan bases, and there’s good reason for that – because it’s bloody good.

Anyone who has seen the ANZ Championship live is wowed by the sheer intensity, skill and passion on court. It’s a high quality product – gender is irrelevant.

As a sports journalist in the earlier parts of my career, I covered women’s sport at the highest level in the early noughties, particularly football, and have seen

W-League games more recently. Not only has the professionalism increased dramatically, but the entertainment on show is great.

And it’s not just netball and football – the women’s Big Bash League Cricket has exceeded all expectations. Our Rugby 7s’ side is a gold medal favourite for Rio and the Hockeyroos are superstars in their sport. Then there’s swimming, cycling and basketball where highly marketable Aussie women will be gunning for gold.

The common denominator for the abovementioned competitions is that the product is high quality and compelling in its own right, and this inevitably attracts bums on seats and eyeballs on the box.

No longer are brands purely backing women’s sport because they want to reach mums or make it part of a CSR activity.

Repucom research shows that premier women’s sport can be successful on television and the interest level is high among women and men.

And when you consider women’s sport is far less cluttered than men’s, the business case for sponsorship becomes increasingly compelling.