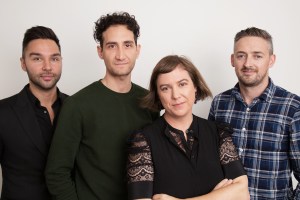 Chris Jovanov, Jess Lilley and Jim Walsh all join the company with a diverse background across digital, creative and design, while Daniel Pizzato has been promoted internally.

Jovanov has been appointed digital creative director and will be responsible for evolving the company’s digital offering. He has experience with multiple Australian and international agencies including R/GA New York, AKQA Melbourne and Clemenger BBDO.

Creative duo Lilley and Walsh will head up a range of brands, with a focus on driving Leo Burnett Melbourne’s creative offering. Both join the agency from JWT Melbourne, where they held similar roles.

“We’re happy to be joining an agency with such strong leadership and a genuine drive and enthusiasm to create brilliant work,” Lilley says.

“I’m personally impressed that the creative department is 50% very talented women – still a rarity in agency world and a reflection on Leo’s commitment to equality and diversity.”

Pizzato has been promoted within Leo Burnett Melbourne. He is teamed with existing creative director, Michelle Walsh, to leverage his design, fashion and conceptual creative experience across major clients.

“We’re excited about these four appointments. We’ve been building our offering as a creative solutions company in both Melbourne and Sydney for some time, and each of these four will bring fresh energy and firepower,” Leo Burnett Australia CCO Jason Williams says.

The hires follow the departure of long-time Leo Burnett Sydney co-ECD Vince Lagana to The Monkeys.