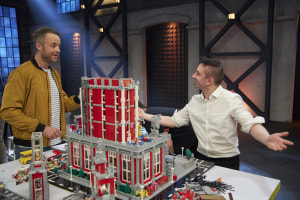 Nine has returned to the top spot in primetime, with the debut of its latest series Lego Masters cracking 1.3 million metro viewers in its debut episode.

Drawing in 1.37m overnight metro viewers, the show, hosted by Hamish Blake, sees Lego creators battle it out in a series of challenges to create various Lego structures. Last week, Nine revealed the major sponsors for the new show.

Nine had been heavily promoting the show throughout the run of its reality dating program Married at First Sight, which would have contributed to the strong Lego Masters launch considering the consistent ratings success MAFS yielded.

Lego Masters also knocked off Seven's My Kitchen Rules grand finale, which was broken up into two sections, 'winner announced' and 'grand final'.

The winner announced and grand final segments drew in 946,000 and 873,000 overnight metro viewers, respectively. Best friends Luke and Matt won the night in the first all-male finale in the show's 10-year run.

MKR's grand final shed close to 600,000 overnight viewers compared to its 2018 finale, with the show struggling throughout the season, as MAFS drew eyeballs away from the cooking show.

Seven also used the night to kick-off the latest season of its reality home improvement program House Rules, which was up on its 2018 season debut.

At its annual upfronts event in 2018, Seven director of content scheduling Brook Hall told AdNews the network wouldn't suffer from "over-saturation" or audience fatigue, with the network also set to air a second '10th Anniversary Special' of the show later this year.

Ten's Bachelor in Paradise felt the sting of Nine and Seven's primetime offerings, with the show slipping under 450,000 metro viewers, with a total of 427,000 people tuning in.

Despite the MKR grand finale and House Rules launch, Seven was unable to capture the overnight main channel victory, with Nine pipping them to the post.

Nine's share fell just short of 25%, reaching 24.8%, narrowly edging out Seven, which took a 23.9% share. Ten felt the brunt of the impact, once again slipping below double digits and losing out to the ABC. Ten took an 8.7%, compared to the public broadcaster's 11.8%.