Kim Kardashian and Sharon Strzelecki have 'noice' meals via UberEats 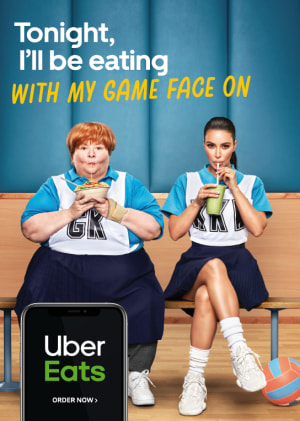 UberEats has enlisted Kim Kardashian and Magda Szubanski in its latest iteration of the 'Tonight I'll be eating' campaign series.

Only this time, Kim is played by Kardashian instead of Gina Riley.

However, Sharon has planned a few lessons in the Queen's English, including teaching Kardashian how to pronounce "noice".

“Pulling this one off came with an extra degree of difficulty,” Special Group ECD and partner Julian Schreiber says.

“But thanks to both Kim and Magda’s willingness to have fun with their personas and really embrace the situation - the ads turned out very noice.”

"Being able to leverage world-class talent while maintaining our iconic Australian flavour to hero 12 of our top restaurant partners is important to us and a key part of our campaign construct," UberEats head of marketing APAC Georgie Jeffreys says.

"We’re delighted at the response we’ve already received and are excited to drop even more Sharon and Kim creative very soon.”

With more to come in the following weeks, the campaign will also be supported by OOH, social, radio, digital, direct and PR as well as media partnerships and traffic-read integrations.

The campaign is the latest iteration of UberEats' 'Tonight I'll be eating' brand platform which is now in its third year.

Since then, it has starred a number of local and international famous faces including Hamish Blake and Andy Lee, Sophie Monk, Boy George, Naomi Watts, Rebel Wilson, Ruby Rose, Lee Lin Chin and most recently John Farnham, Jimmy Barnes and Anh Do.