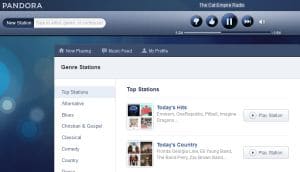 Pandora Aus/NZ may not be quite ready to throw out is CPM rate card, but its American parent has flown in a senior management figure to engage brands and agencies in discussions about 'viewability' and the economy of attention.

Jack Krawczyk, Pandora VP product management, has been in Australia only three days, but has been meeting with the music platform's customers, brands and agencies, pushing the conversation in favour of the company's fresh agenda to explore the value of attention.

The concept is by and large relatively simple, but is yet to take mainstream hold across the globe. Only yesterday the Financial Times (FT) in the UK revealed that it will be charging advertisers per hour, as opposed to relying on its CPM ratecard.

The FT's move has given Pandora greater confidence that it's sparking the right conversations with advertisers and that steering the model away from conventional charging is almost an inevitability.

“It really starts with this conversation: viewability is the first step in the attention economy where we're basically saying that an ad that is viewed for zero seconds is not equal in value to an ad that's in-view for one second. It's a very binary concept,” says Krawczyk.

Krawczyk is largely disapproving of the current online display charging model. “So many of the assessment metrics which are associated with digital advertising - 'did my ad reach the target audience?' - 'what is the click-through rate?' are the the wrong way to look at it,” he boldly claims.

He reveals that his main purpose in Australia is to talk to customers about “why attention is such a valuable function in evaluating an effective advertising campaign” and “why attention is such an important mechanism (for Pandora),” therefore insinuating that this could ignite a whole revision of how the service charges its advertisers.

He points to the recent introduction of branded stations, which operate like native content in the audio space.

“The best example in Australia is we're doing with Fitbit,” he explains. “Users have the choice of listening to a workout, upbeat station, or a relaxation station and we can build the Fitbit story through both of those stations.

“We realise we're created something our listeners will engage with – the average listening time on those stations is 35 minutes – that's 35 minutes with a brand. I can't think of any other platform which offers that,” he stresses.

Krawczyk concludes, “It's an argument to evaluate what's effective. We want to drive the conversation towards this: you might be getting ad rates that are a quarter of the cost because they are running through an ad network, but ultimately if they are only being seen for one or two seconds, how much value are they actually generating?”