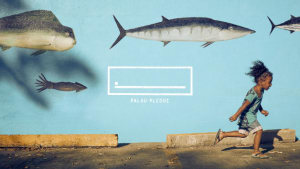 The Palau Pledge, an Australian-founded conservation effort that changed immigration law in the Micronesian nation, is the most celebrated winner at Cannes Lions winning three Grand Prix gongs on the final night of the festival.

It scored both the esteemed Titanium Grand Prix and the inaugural Sustainable Development Goals Grand Prix.

Earlier in the week, it scored a Grand Prix in the Direct category.

The Palau Pledge encouraged tourists to be environmentally responsible when visiting the country, having their passports stamped with an agreement not to exploit the natural resources.

The Sustainable Development Goals Lion award was introduced this year and received more than 900 entries. Proceeds from the entries for the award, in collaboration with United Nations (UN), are set to go to sustainable development causes in the coming months.

Titanium Lions Jury President and Wieden & Kennedy Global co-CCO Colleen Decourcy said: "It went beyond messaging. It was not interrupted but integrated into the process.

"It changed minds of governments and made them do something sustainable. It took pieces from everything we loved in the other Titanium winners and put them into this idea that's world changing. This felt like something we should be thinking about moving forward."

Also in the Titanium category, Tourism Australia's Dundee 'Dundee: The Son of a Legend Returns Home' campaign, from Droga5 New York and UM, was awarded. The campaign earned 10 Lions across the week.

Tourism Australia's 'Aussie News Today' campaign, which ran on BuzzFeed and was created by Clemenger BBDO Sydney, also took home a Gold and Bronze Lion in the category.

BWM Dentsu Sydney also scored a Grand Prix for Good on the last night in recognition of its 'Project Revoice' campaign for the ALS Association.

The campaign, created in collaboration with Finch, Rumble Studios and Haystac, documented efforts to restore basic speech to a co-founder of the Ice Bucket Challenge.

The technology used footage of Pat Quinn’s many public appearances discussing ALS and the Ice Bucket Challenge to recreate his voice.

Australia has been awarded four gongs in the Film Lions category, with Cummins&Partners landing a Gold for its Go Gentle 'Stop The Horror' campaign created with Revolver/Will O'Rourke.

JWT Sydney was recognised for its Queeraz 'Virtual Equality' work with a Silver Lion and a Bronze Lion was handed to BMF for its 'Pasta Sauce' campaign for Aldi.

Tourism Australia and Droga5 were awarded a Silver Lion for its 'Dundee' campaign, which was a collaboration of American and Australian agencies.

Clemenger Melbourne was the only Australian agency awarded in the Creative Effectiveness Lions, picking up two Bronze Lions for Snickers 'Hungerithm' and TAC 'Meet Graham' - two campaigns that were heavily awarded at last year's Cannes Lions.

Revolver/Will O'Rourke was awarded runner-up for the Palme d'Or award, presented to the most awarded production company at Cannes Lions 2018. In first place was MJZ in the USA.