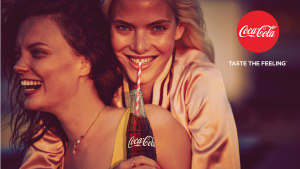 A radio ad from Coca-Cola has been banned by the Advertising Standards Bureau (ASB) for giving the impression that its fizzy drink is a suitable replacement for lunch.

The radio spot featured a couple intent on going for a sandwich, but as the woman’s stomach grumbled she took a sip of her drink and said, “that’s better”.

The ad finishes with the tagline “Coca-Cola. Taste the feeling”.

A complainant slammed the ad as “hopeless” and “rubbish” and said it contributes to Australia’s diabetes and obesity problem.

Coca-Cola “respectfully disagreed” with the concerns raised to the ad watchdog, adding the drink is being associated with the entire lunch time meal.

The ASB concluded that the advertisement of Coke implied it would be a suitable substitute for lunch and this undermined the promotion of a healthy balanced diet, and therefore breached advertising codes around food promotion.

The ad has now been removed and Coca-Cola says it will ensure the ad will not be re-broadcasted in the future.

Recently, a petition was launched to ban the Coca-Cola's Christmas trucks from touring Australia and the brand was awarded several Shame Awards for its marketing to children.