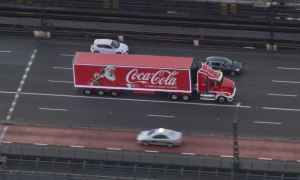 A petition has been launched to ban the Coca-Cola truck from touring Australia before its planned conclusion at Sydney’s Carols in the Domain.

The petition comes from lobby group Parents’ Voice, which is an online network of parents that have taken a firm stance against the marketing of unhealthy products to children.

Parents' Voice are most concerned about the trucks presence at the Carols in Domain as it has a primary audience of children.

So far, the petition has fewer than 1000 signatures.

“The Coke Christmas truck is stealth marketing aimed at Australian kids, and we're not buying it.”

The Coca-Cola trucks rolled out across Australia in November for the first time, taking off on tour of regional areas where it will host festive events including pop concerts.

The trucks have long signalled the start of the festive season in the UK and US.

Coca-Cola partnered with The Salvation Army for the initiative, which Parents’ Voice says is a ploy to associate the brand with do-gooding.

“Their decision to partner with The Salvation Army is not out of the goodness of their corporate hearts, it’s about disguising their marketing techniques,” Parents' Voice campaign manager Alice Pryor says.

“It is particularly disappointing that Coca-Cola has decided to visit Tamworth as their first stop, as like much of regional Australia, Tamworth has high levels of overweight and obesity with 73.9% of the adults in the region overweight or obese.”

At the annual Parents' Voice Fame Shame Awards, Coca-Cola's Christmas truck was awarded a dishonourable mention for its marketing to children. Read the full results of the awards here.