Kellogg’s, Coca-Cola and McDonald’s shamed for marketing to children 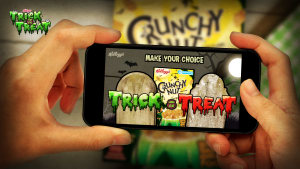 The campaign for Kellogg's was developed by Orchard

Kellogg’s has taken out two of five Shame categories in the 2017 Parents’ Voice Fame and Shame Awards.

Recognised in the Digital Ninja and Smoke and Mirrors categories, Kellogg’s was shamed for promoting some of its most unhealthy products to children.

Now in its 13th year, the Fame and Shame Awards highlight the worst of junk food marketing to kids.

Kellogg’s’ Halloween partnership with Shazam received the Digital Ninja award for being the digital media campaign that Parents' Voice said it "most obviously" targeted children and drived active participation in the brand.

“Kellogg’s has once again disregarded the health of Australian children by developing campaigns which target a young audience. The use of augmented reality technology, in conjunction with a Halloween campaign, is clearly designed to appeal to children,” Parents’ Voice campaign manager Alice Pryor says.

Kellogg’s also picked up the Smoke and Mirrors award for its LCMs commercial for "making an unhealthy product appear healthier than it is".

“Despite the featured LCMs bars scoring as low as 0.5 health stars, Kellogg’s has presented them as an appropriate everyday addition to lunchboxes,” Pryor adds.

Kellogg’s responded by saying that people have to be over 13 to use the Shazam app for its Halloween activation and it was targeted at teens and mums, not children. In response to the complaints against the LCM ad, Kellogg’s said the organisation is “wrong in shaming” it for misleading claims. Read there full statement below.

McDonald’s’ Made for Family/Despicable Me 3 Family Box commercial claimed the Pester Power award.

The Parents' Voice organisation called into question the motivations of the ad, which featured a young boy wearing a minion bodysuit.

Coca-Cola’s Coke Summer took out the final Shame award, becoming the inaugural Bother Boards recipient for its use of interactive billboards.

The billboard in question, by oOh! media, asks teenagers to use their phones to connect to the panel, throwing ice cubes at cans of Coke, with winners receiving a can dispensed directly from the panel.

This year, Aussie Apples took out the two major Fame categories, while Aldi and Netball Australia were also recognised.

In the Parents’ Choice Award for Food, Aussie Apples’ Get Your Crunch On campaign came out on top against Heinz, Uncle Tobys and Brownes Dairy. The advertisement shows apples picked from trees placed in lunchboxes for school kids, who consume the fruit in the company of active dancers and netballers.

Topping their two formal wins, Coca-Cola was also awarded a dishonourable mention, along with their partner, The Salvation Army, who have teamed up to bring the Coke Christmas Truck to Australia for the first time.

“The claim of ‘no artificial colours/flavours’ in the ad is truthful and factually correct. Parents’ Voice is wrong in shaming the LCMs ad for misleading claims. LCMs were all represented as part of a healthy balanced lunchbox while the voiceover spoke to mum as the target audience,” said Kellogg’s. “It’s disappointing to see LCMs unfairly targeted for misleading product claims when there were none.”

Shame Digital Ninja - Given to the brand which has used digital media in the most obvious way to target children, gaining their attention; driving active participation in the brand and encouraging pester power.

Shame Smoke and Mirrors - Awarded for the use of misleading claims on children’s foods that make an unhealthy product appear healthier than it is.

Shame Pester Power - Awarded to the food marketing campaign that uses techniques which appeal to children, leading them to nag their parents for unhealthy foods.

Winner
McDonald’s - Made for Family/Despicable Me 3 Family Box

Shame Foul Sport - For a company, team or athlete using sport to promote unhealthy food and drinks to children.

Shame Bother Boards - Given to the brand which has used interactive billboards in shopping centres, indoors and outdoors, to influence children.

Winner
Aussie Apples - Get Your Crunch On

Runners up
Heinz - A Can Size for Every Aussie - Geoff the Film
Brownes Dairy - An Easy Yes starring Finn
Uncle Tobys - Are You Powered By Oats?

Runners up
AFL/Auskick - I’d Like to Play That
Cricket Australia - Play For More!