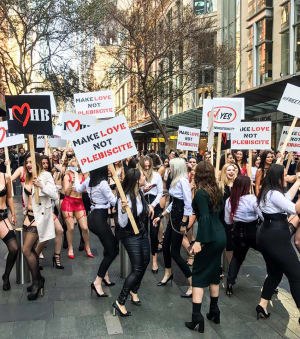 An image of the protest [Image: Honey Birdette Facebook]

Media Watch has called out Honey Birdette for using the same sex marriage vote to sell its products by staging a racy 'protest'.

One last night's episode, host Paul Barry slammed the lingerie brand for its “shameless marketing campaign for undies” disguised as support for the Yes campaign and women empowerment.

Honey Birdette’s customers were also not so sure about the company using same-sex marriage to sell suspenders and stockings.

One person on Facebook said the protest was “worse than the Kendall Jenner Pepsi ad”, describing it as a “money grab”.

Another said: “Using a human rights issue to sell underwear is abhorrent and coming from a company that treats its staff so badly only makes it worse”, referencing sexual harassment claims made against the company by employees last year.

Others celebrated the company showing its support for marriage equality: “Love a company that can form an opinion and hold itself accountable for issues affecting its employees/customers and affiliates.” 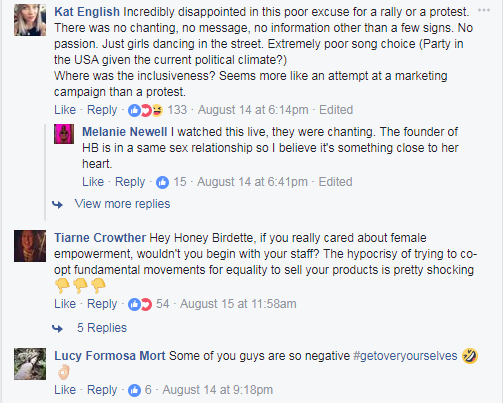 As Australia prepares to vote on same-sex marriage, commentators have predicted that more brands and public figures will drape themselves in rainbow colours and proudly sloganeer ‘Yes’ across their social feeds as a way of cashing in on the debate.

The plebiscite also brings with it the supporters of the No campaign. Yesterday Melbourne was plastered with a poster with the slogan "Stop the fags".

This isn’t the first time Honey Birdette’s advertising has caused controversy with its advertising. It’s had several campaigns banned in the past, including one featuring a bound and gagged Santa in 2016.