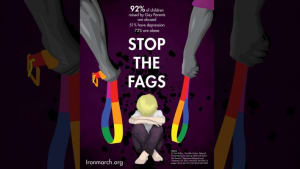 The poster appeared in Melbourne

A poster bearing the slogan "Stop the fags" has appeared on a street in the centre of Melbourne as homophobic campaigns begin to surface ahead of the same-sex marriage plebiscite.

The poster claims that 92% of children raised by gay parents are abused - a figure taken from a single widely discredited US study of only 20 children.

The flyer shows a graphic of a child cowering before two figures carrying belts patterned with the rainbow stripes of the LGBTQI flag.

Advocates have condemned the material as well as a leaflet printed in English and Mandarin found in Hurstville, Sydney.

The leaflet, targeted at English- and Chinese-speaking Australians, warned that homosexuality is “a curse of death in terminating the family line … without decedents [sic]”.

“Homosexuality is a tragedy of a family, a grave to the family bloodline, a curse of family sonlessness!”

Some of the marriage equality "respectful debate" in the letterboxes of Hurstville this morning.

Opposition Leader Bill Shorten took to Facebook today to call out the “disgusting” posters, encouraging Prime Minister Malcolm Turnbull to do the same.

“Labor opposed this postal survey because we feared exactly this kind of hurtful filth would emerge,” he said.

“This kind of garbage isn’t ‘debate’, it’s abuse. I’m so sorry that LGBTI Australians have to put up with it.”

So it looks like the "No" campaign has the backing of actual nazis. pic.twitter.com/FZAGexrvgE

Shorten initially addressed the lack of regulation in plebiscite messaging in parliament following the news the government would spend $122 million on a non-binding same-sex marriage postal vote.

He said it would open the floodgates to “hurtful filth” being spewed by the parties and supporters of the ‘No’ campaign.

In response, The Royals started a campaign to get other creative agencies to reject working for parties that support the ‘no’ vote against marriage equality.