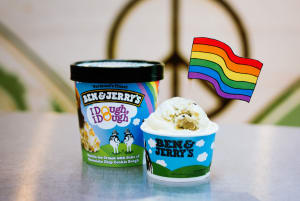 Ben & Jerry's is taking a bold stance against marriage inequality, banning the sale of two same flavour scoops until same-sex marriage is legal in Australia, in partnership with The Equality Campaign.

While the ice-cream company accepts the decision might feel a bit cold, the move aims to melt politician’s standing on the issue and encourage people show their support.

As well as the same-flavour ban, Ben & Jerry's has created an in-store postal service across its 26 stores nationwide to help customers lobby their local MPs.

Customers are invited to put their opinions in writing and members of the Ben & Jerry’s team are promising to deliver these messages directly to local MPs ahead of the next parliamentary sitting on 13 June.

“More Australians than ever before believe everyone should have the right to love who they love – and marry them too. Let’s make it happen. Go to your local scoop shop to send a message to local MPs to tell them you support marriage equality and you want them to take action now,” Rugg says.

Ben & Jerry's has a history of following and commenting on world issues. In 2002 it released the 'One Sweet Whirled' flavour seeking to bring attention to global warming. During the 2009 election, Ben & Jerry's stood firmly behind Barack Obama with its 'Yes Pecan' flavour.

Most recently, the brand backed Deomocratic candidate Bernie Sanders with the “Bernie's Yearning” flavour in 2016.

This is also not the first time the company has (ice)screamed for equality in Australia. In 2013 Ben & Jerry’s launched a flavour in scoop shops called I Dough, I Dough to start conversation ahead of the election.

The Equality Campaign executive director Tiernan Brady says: “Marriage equality will not change anything for the vast majority of Australians, but will make a profound difference to the status and dignity of many. No one will be less married or more gay with civil marriage equality.”

“At equalitycampaign.org.au supporters will find the tools to lobby their MPs, hold local events, and share with their communities the many reasons why marriage equality matters. Our message to MPs is that this issue is not going away until parliament respects the will of the Australian people and passes marriage equality,” Brady added.

The campaign is running in Ben & Jerry's stores between 22 May and 9 June.