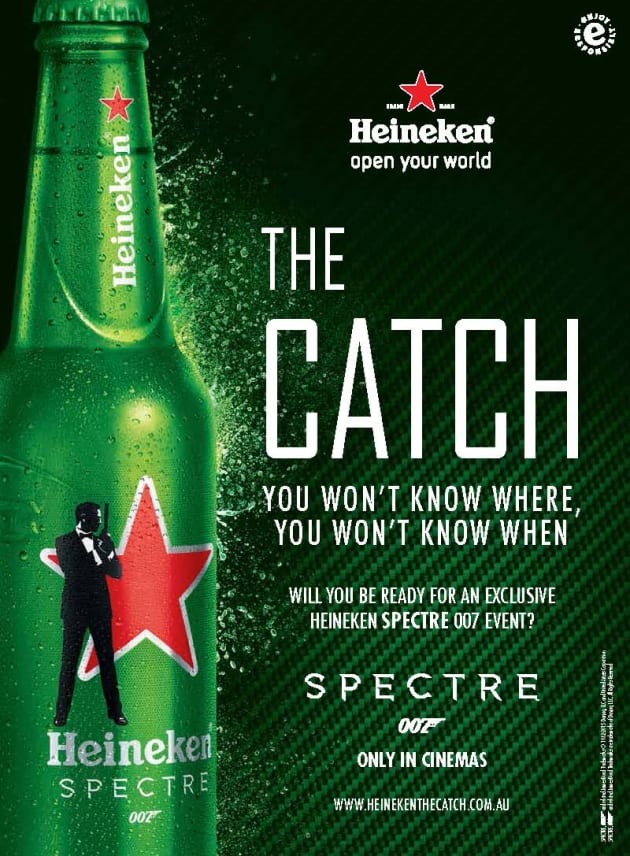 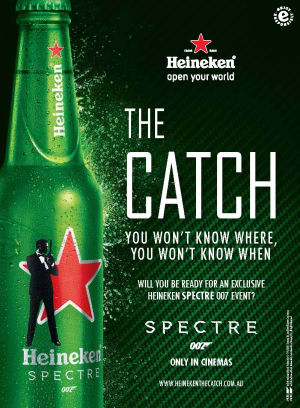 To tie in with the new Bond film, Heineken is launching its largest global marketing platform of 2015 – a campaign that promises to whisk fans away for a “mystery” experience at a moment's notice.

Heineken marketing manager Alessandro Manunta told AdNews winners can expect to be offered the chance to engage in anything from a helicopter-driven bar hopping experience, to a gourmet dinner, to a night at one of Heineken's exclusive bond parties, where “glamour, prestige and mystery” will be the watchwords of the evening.

The “never before witnessed in Australia” experiential campaign, dubbed “The Catch”, requires fans to sign up via the the website heinekenthecatch.com.au for a chance to attend Heineken's exclusive “Spectre” parties and events in November and December.

If an entrant is selected they can expect a phone message to notify them, followed by a call a couple of days later and then – a mission.

“Then the call comes and it will notify you that you'll have a little mission to solve. It could be, 'Go and meet the lady in the white hat on the corner of the street and tell her these secret words …'. Then your mission will start,” said Manunta.

Explaining the strategy behind the campaign, he told AdNews: “Our objective is to engage with our consumers. Nowadays you need to do something out of the ordinary and also something that adds some local relevance in our market. That's why we created The Catch.”

Asked why The Catch is the right campaign for the Australian market, Manunta said: “We learnt that in this market we need to come up with something exciting for consumers but at the same time it needs to be simple. In Australia they tend to look into opportunities that come and knock at their door rather than go out to them. So we came up with something that is the brand going to the consumer more than the other way around.

“We also know that there are aspects of Bond that are relevant to consumers in Australia, and that's the mystery and the glamour side, so that's something we've really dialled up.”

The campaign will be supported with strong media investment across free-to-air and subscription TV, cinema and digital, showcasing ‘The Chase’, a TVC featuring the film’s star, Daniel Craig.

Manunta says he expects as many as 1,000 people to win a chance to participate in “The Catch”, up from a typical figure of around 200 to 500.

Heineken is investing a lot into the Bond parties, said Manunta, which will be in a secret location.

“There's one in Sydney on November 18 and one in Melbourne on December 2. There'll be a lot of surprise acts and incredible gigs. It's a mix of glamour, prestige and mystery. The response to those have been really great so far,” he added.

The beer brand is also making available special edition SPECTRE packaging via an estimated half a billion bottles on sale around the world.

The Australian packaging will feature an on-pack consumer promotion, where every specially marked 24 bottle case of Heineken contains a unique code to redeem for a cinema voucher to Spectre.

The new campaign comes hot on the heels of Heineken's recent successful AU$43.5 million sponsorship of the Rugby World Cup, which saw it take the lead as the brand most associated with the tournament, according to a mid-tournament assessment by brand intelligence firm, Amobee.

“This is very different for us,” said Manunta of the Spectre campaign.

“With the Rugby World Cup that's mostly viewed as conversion, mostly activation through below-the-line and to drive transactions. Whereas the partnership with Bond is more to drive the personality of the brand, to sell the corporate position of the brand, as Bond is the ultimate Heineken drinker. It's a driver of equity rather than transactions.”