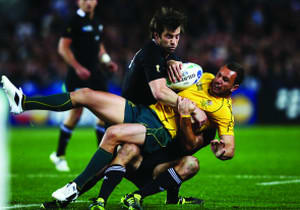 While Australia muscled its way past Fiji on the pitch this morning, Heineken has been winning the brand war off the turf with the Dutch brewer recording a brand association figure with the Rugby World Cup (RWC) 1.84 times stronger than second-placed Fox Sports.

This is according to data compiled by Amobee, which demonstrates - thus far - that Heineken's £20 million (AU$43.5 million) sponsorship deal is providing value.

Heineken had managed to shove aside Diageo-owned Guinness in the race to secure exclusive rights as sole alcohol provider to RWC venues.

Another interesting fact to emerge from the data is that Samsung and BMW - respectively the offical sponsor and official vehicle partner of the Wallabies - have managed to accrue stronger associations than Qantas, the team's offical naming rights partner.

The Korean and German brands have both launched integrated campaigns aimed at the RWC, with Samsung creating the '#WeRiseTogether' campaign featuring an Israel Folau alarm tone to help hoist bleary-eyed rugger fans out of bed for the early kick-offs.

For their part, BMW produced a campaign featuring a stirring minute-long TVC that anointed the brand as the 'driving force' behind the team. Other measures included large format OOH advertising and digital content in addition to in-store POS installations.

"With Samsung, BMW and Beats all emerging amongst the top five most associated brands with RWC, this certainly demonstrates the benefits of creating campaigns and messaging to accompany sponsorships around such major events," said Amobee's ANZ managing director Liam Walsh.

"Ultimately, this enables brands to develop further association with an event over and above that of a sponsorship package – thereby stretching their advertising dollar and increasing engagement and ROI."

To gain this data, Amobee utilised its patented Brand Intelligence technology to measure and analyse content consumption from more than 600,000 websites. Importantly, this did not just pick up on social media chatter, but also took in what was actually being seen, read and watched on these sites.

But why should these findings be pertinent to advertisers?

"The insights empower advertisers to identify content, sentiment and trending topics that their target audience are most interested in. More importantly, it enables brands to activate media around these hot button issues in real time, to optimise digital campaigns for increased consumer engagement," said Walsh.

"Brand activation around major sporting events has proven to be a valuable campaign move for brands, as it enables them to amplify both online and offline presence where it truly matters to their target audience.

"With global events like RWC attracting fans from all over the world, this provides a fantastic platform for advertisers to raise brand awareness, create beneficial relationships with likeminded brands, as well as strengthen and establish relationships with their consumers."