Guardian to invest in VR after successful testing round 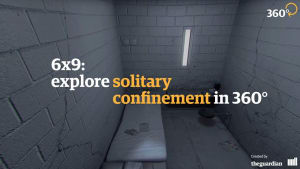 The Guardian brought its first virtual reality (VR) project to Sydney at the the Human Rights Arts & Film Festival (HRAFF) screening of The Bad Kids at the Dendy Newtown on Saturday.

The 6x9 VR experience launched in the UK earlier this year, placing viewers in a virtual solitary confinement cell, telling a story of the psychological damage that extreme isolation can cause.

The film aimed to highlight the physiological deterioration and sensory deprivation that can result from being placed in long term in a solitary confinement prison cell.

HRAFF attendees grabbed a pair of Google Cardboard headsets to gain a better understanding of what confinement really feels like.

The VR experience launched as an app, which hit number two on Google Play in the top news app category.

Guardian UK special projects editor Francesca Panetta told AdNews the VR video was an example of how the Guardian is experimenting in expressing stories in a different way.

“The 6x9 video shows how the Guardian can tell a story in an experimental way, beyond straight video or writing,” Panetta says.

“The Guardian as a publisher is brave. We aim to be advanced in terms of experimentation, with visual and social ways of storytelling and using social feeds, live blogs and interactive methods to connect to our audiences.”

The Guardian UK is currently looking at ways the publisher can finance doing more VR pieces after the initial testing round proved to be successful with viewers.

"Now we know this works for journalism, we have proof of concept and we can look at other stories where VR will deliver more impact [to readers].

While Panetta says there are no plans for advertisers to use VR technology at this stage, it is something that she hopes to see materialise soon.

VR is an area brands are contuining to explore. Just this week McDonald's launched a VR film for the release of the Angry Birds film and Etihard Airways used the technology for its latest campaign.