The Guardian puts readers in solitary confinement with VR 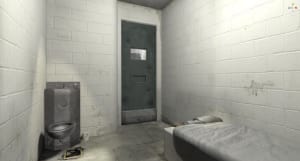 The Guardian UK has launched its first virtual reality (VR) piece which places viewers in an interactive, virtual segregation cell.

The film aims to highlight the psychological deterioration and sensory deprivation that can result from being placed long term in a solitary confinement prison cell.

VR is fast becoming a popular means of storytelling, with brands such as Budget Direct, Samsung and Tourism Australia investing in the technology.

The eerie video, created in collaboration with content creation studio The Mill, is a virtual cell built in CGI.

The cell is a composite of references from a range of prisons throughout the US. When ‘inside’ the cell the viewer can interact with objects and learn the realities of life in solitary confinement.

Throughout the clip, viewers hear audio from interviews with seven former inmates who were in confinement for between one and eight years. During the video they talk to viewers about what they can expect during the film.

One says: “After a while things start to slip. I find myself floating.”

Another says: “People turn on themselves.”

Academic psychologists Dr Terry Kupers and Dr Craig Haney are also featured in the 360-degree video, explaining the physiological effects the viewer experiences – from figures appearing in peripheral vision to the sensation of floating.

See how it works below: