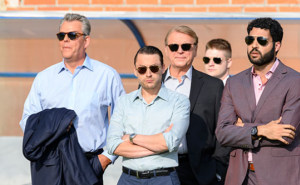 Foxtel is launching its new streaming service on May 25, marking a “milestone” in the group’s transformation strategy.

The new platforms will enter the crowded streaming market with exclusive content from HBO after Foxtel secured a deal with WarnerMedia earlier this month.

It will also host content from Warner Bros., HBO Max, Sony, FX, NBCU and the BBC.

Further details on pricing, content and the name of the platform, expected to be called Binge, will be released later this week by Julian Ogrin, head of Kayo, who has been overseeing the service, dubbed Project Ares.

“There has been a lot of speculation about our new streaming service and its name, and we are pleased to finally be ready for the big reveal to Australia next week,” says Foxtel Group CEO Patrick Delany.

“We have been beta-testing the service for a few weeks and we are sure Australians will love everything about it. It brings an exciting new brand to younger streaming audiences with a very different and compelling product experience, and a distinctly curated mix of the best drama and movies from the world’s best entertainment brands.

“The launch will be another milestone in the Foxtel Group’s strategy to transform ourselves and bring our unparalleled catalogue of entertainment and sports to even more viewers in Australia. Our goal is to consolidate our position as Australia’s preeminent subscription television and streaming provider.”

While Delany says subscription TV is the “foundation” of the business, with 2.2 million customers, it’s looking at streaming for growth. Foxtel has another 272, 000 paying Kayo subscribers, after numbers fell dramatically as live sports was suspended, and another 317,000 paying Foxtel Now subscribers.

Foxtel, majority owned by News Corp, has been hit by the pandemic’s economic fallout in recent weeks, with 200 roles made redundant, and another 140 stood down until the end of June.

“Our growth engine is in streaming. It includes Kayo Sports which has grown rapidly and is expected to resume subscriber growth when live sports restarts later this month with COVID19 restrictions easing,” Delany says.

“Our new entertainment streaming service, which launches next Monday, provides a different curation of the Foxtel Group’s entertainment content focussed on mobile devices and the streaming generation who want to share on the big screen.

“It is distinctly branded and aimed at part of the Australian market who either don’t want to pay for our premium product or who have decided Foxtel is not for them.”