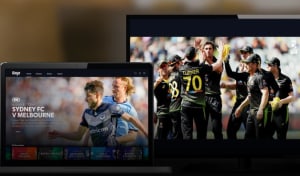 News Corp has written down the value of subscription television platform Foxtel by nearly $US1 billion (AUD1.5 billion), with big falls in subscribers to streaming platform Kayo as live sport disappeared during the coronavirus crisis.

Paying Kayo subscribers fell by a third to 272,000 from 408,000 between the end of March and the start of May, according to numbers lodged by News in the US.

The company posted a net loss for the quarter of $US1 billion (AUD1.5 billion), reflecting a $US1.1 billion (AUD1.69 billion) of non-cash impairment mainly related to a write-down of goodwill at Foxtel and the reclassification of News America Marketing, which is being sold.

Of the $US1.1 billion, $US931 million (AUD1.4 billion) related to the goodwill and intangible assets at Foxtel.

"Closures of pubs and clubs and lower occupancy at hotels throughout Australia have also adversely impacted, and are expected to continue to adversely impact, commercial subscription revenues," says News.

Foxtel had 2.933 million subscribers at the end of March, an increase of 1% compared to the same three months last year.

The rise was mainly due to subscriber growth at Kayo, partially offset by lower broadcast subscribers.

Of total subscribers, 2.208 million were residential and commercial broadcast subscribers, and the rest Foxtel Now and Kayo users.

But this changed dramatically the next month. At May 2, there were about 272,000 paying Kayo subscribers, reflecting the impact from the cancellation or postponement of sports events due to the COVID-19 pandemic.

Broadcast subscriber churn in the quarter improved to 17.5% from 17.7%, driven by improvements at the Foxtel retail channel, partially offset by increased volume of churn from lower-value customers on expiring contracts in wholesale channels. Broadcast ARPU, or revenue per customer, for the quarter was relatively stable at $A79.