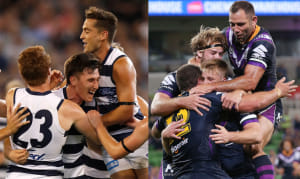 MCN CEO Mark Frain says the ratings from both the AFL and NRL's opening rounds saw subscription TV outperform free-to-air in terms of  year-on-year audience growth in 2019, adding he was confident of the impact this would have on the growth of the Foxtel product.

This weekend’s AFL round one audience was up 17%, when compared to the same round in 2018, according to the latest ratings statistics collected by Oztam.

Friday night's game between Collingwood and Geelong drew 311,000 average audience viewers, up 21% on 2018 Friday night regular season and up 14% on round one last year.

"It’s been a great start for both the footy and the league, with the Foxtel platform continuing to build momentum following a breakthrough Summer of Cricket," Frain said.

Over the summer, Foxtel aired its first Test, ODI and Big Bash seasons of cricket after it secured the rights to the code in a $1.2 billion deal, which also included FTA partner, Seven.

Foxtel touted its biggest ODI series to date during this time, while also showing strong early signs of Test cricket growth on the platform.

"We’re seeing a halo effect across all channels due to the interest generated by Fox Sports’ unparalleled coverage across different sports codes," Frain added.

This follows the record start to the NRL season on March 14, with the season opener generating an average audience of 338,000 tuning in to watch the Storm take on the Broncos – which was the highest-ever rated Thursday night game on Fox League, up 29% on last year’s season opener.

The final game of round one, Titans vs Raiders on the March 17 delivered 241,710 viewers, up 11% on last year’s round one finisher, while this weekend's round two game between the Raiders and Storm delivered a 7.7% audience uplift.

"These codes are at the heart of Australian culture, and this year we are innovating how brands support the AFL and NRL across the Foxtel platform, including through our digital audiences on Kayo," MCN Foxtel sales and brand partnerships director Martin Medcraf said.

"At the heart of this offering are new forms of integration, and a dedication to enhancing the viewer experience. As a result, we are seeing rising audiences, more engaged footy fans, and more effective campaign opportunities.”

The growth in audience for both codes could also be attributed to the launch of Foxtel's newest sports streaming platform, Kayo Sports, which earlier this year reported it had already signed on more than 100,000 paying subcribers.

Over the past two weeks, Nine and Seven have revealed their respective free-to-air strategies for the NRL and AFL.

Nine stated it would take a more "contemporary" approach to the NRL's broadcast this year, as it looks to capture the attention of younger fans of the game, adding more recent Rugby League 'greats' to its commentary team.

Seven stated it was expecting its "most explosive" start to the 2019 AFL season in years, with the network expecting higher commercial investment, as well as ratings, following the new rule changes made by the league this year.