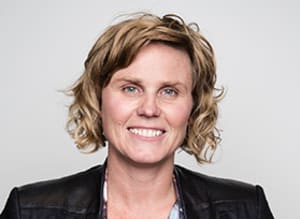 Nicole Taylor has spent her career in advertising, working at the likes of GPY&R, BWM and DDB. In recent years she's been leading DDB's Sydney shop, with Taylor flying the flag as one of the few women taking on a top job at a creative shop in Australia. AdNews stole five minutes with Taylor to talk about her career and what's changed over the years.

Did you ever think about leaving advertising at any point?

I did and I took one job back with Y&R, they called it the general manager of the mobile alliance for WPP- sounds pretty fancy doesn’t it? I had a real passion for innovation and because I was so well trained on Telco, I quickly understood the power of the mobile phone for being way beyond a talking device and it being an advertising slash marketing opportunity...and this was pre-iPhone. I thought I might pursue more of that angle, it could’ve been client side at that point, it could’ve been agency side, but I thought I was heading in that direction but as fate would have it, Y&R also wanted me to be the general manager of the agency.

Did you have any reservations about taking a top job at an agency?

I think you’re always answering the critic in your own head, and especially for the MD job at DDB, I had to push through my own self doubt before anyone else’s. Once I did that, it was easy. I think we’re just our own worst enemies sometimes. I wasn’t sure if I was ready, it’s all those cliches that you read in books, but once I pushed through that I felt almost superhuman.

Do you think it makes a difference having a woman running an agency?

I think, you can see the effect that has on the younger people of the organisation without a doubt. You know, the young women and the young men, it’s definitely something they respond to so positively. It makes them think they can do whatever they want to do. I’ve just got to make sure I don’t fuck it up [laughter] because you don’t want to be the bad role model, you don’t want to be just the woman on the job, you want to be a good MD.

[After experiencing years of a disruption] I think we’re getting clearer about our true value again to clients. We’re building smart agencies and that is worth something. So we can be proud and confident again around our contribution, because through those times where we were trying to work out what our business really is and where we needed to invest, it’s almost as if we took our eye off the most important contribution that we make and that is building brands and that is driving growth for clients.

What is DDB actioning to foster diversity?

[We're aiming to create] an inclusive culture. It's not just about how many women are in the creative department, because that’s a different conversation in a way. It’s a symbol, and I buy that, I really do and I think we’ve got to be really conscious of all the imagery and symbolism that we put out as an industry, if you’re not then you’re not doing the right thing or you’re not trying hard enough. But equally, it’s not the real point. You want a real culture where [diversity] can exist and it’s welcomed.