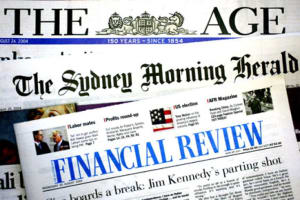 “Fairfax is stuck in a schizophrenic mode"

Fairfax Media has grown its digital subscribers 8% in the last six months from 209,000 to 226,000, a figure which includes The Sydney Morning Herald, The Age and The Australian Financial Review. Around 85% of that growth came from consumers and 15% from B2B subscriptions.

Fairfax director of customer and subscriptions Andrew Porter tells AdNews the growth is a result of the launch of its subscriber-only platform, Subscriber First, which offers more loyalty initiatives, as well as the removal of discounts on subscriptions and a marketing push around the media company’s quality content offering.

Porter says Fairfax has been “firing all cylinders” to increase its subscriptions, with each element contributing to the overall growth.

“It was a tough decision to take away the discount we offered on our subscriptions however we felt it was devaluing the product. We knew we’d take an initial hit but now we are out the other side. At first the acquisition rates did drop, but the revenue increased,” he says.

“Eliminating those people that sign up only for a short period of time has helped us achieve a much better retention rate, with fewer people choosing to end their subscription.”

Another way Fairfax is reducing churn in its subscriptions is by trying to add value to consumers through events.

Earlier this year 1400 people attended the Sydney Morning Herald Live event and another 700 to The Age’s event.

“Our growth rates are steady. What we aren’t seeing is the huge surge of subscriptions from discounting and promotions, and then the drop off three months later. Our loyalty initiatives have also contributed to our churn rates becoming sustainable and a predictable source of revenue. Stability in this media climate is helpful,” Porter says.

When asked if the decline in print ad revenue is placing more pressure on the growth of subscriptions, Porter says it's important to continue to diversify revenue streams.

“Our targets are set with both our subscription model and advertising model in mind. There is no point growing subscriptions at 10 times the current rate if that is at the expense of ad revenue.

“Targets are on the overall economics of our business model. If I can exceed my targets, that’s great. But there is no point reducing 30 free articles down to five if it impacts ad revenue.

With Chris Janz now at the helm of Fairfax’s metro publishing division, Porter says there are plenty of positive signs that the next six months will see subscriptions grow further.

In yesterday’s financial results for Fairfax, CEO Greg Hywood said the appointment of Janz will see the company invest in product and technology development that will be the “centrepiece” of the metro’s next generation publishing model.

While flagging more investment in digital, Hywood says the company will continue to print its publications daily “for some years yet”.

Last year Fairfax announced it was experimenting with micropayments with some of its regional titles. With advertising revenue in rapid decline, dropping 16% in the latest results, the media company is increasingly looking to diversify its revenue streams.

“Micropayments are dependent on existing paywall models to whether you are going to achieve incremental revenue. It may not work for the SMH and The Age, but because AFR already has a hard paywall there could be an opportunity there.

However, you have to consider micropayments in terms of your whole suite,” Porter says.

Customer experience at the forefront

With a focus on customer experience, Fairfax has seen a significant increase in its Net Promoter Score (NPS), which is a management tool that can be used to gauge the loyalty of a firm’s customer relationships.

In the last 12-18 months Fairfax has improved its score by 50 points.
“We’ve investing in the customer experience space heavily, involving the whole company around customer centricity. It’s not a fluffy concept, it drives results,” Porter says.

The rise in the NPS score has allowed the media company to reduce the cost of its call centre that responds to customer complaints by 30%. The money saved in this area, Fairfax has been pumping back into its events.