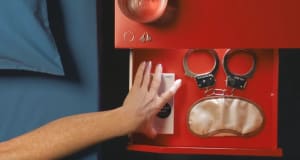 A still from the Ansell ad

Global online marketplace Etsy has been called out for copying an Australian ad for Ansell condoms. Australian studio Good Copy pointed out the similarities between Etsy’s first global campaign which launched last week and an ad it worked on for Ansell last year alongside content agency Ex Tropic.

Both ads centre on the idea of different people’s nightstands and how the contents vary between individuals. Etsy’s ad, by Office of Baby, takes a more brand appropriate G-rated approach, showing nightstands draws full of toys and another with rosary beads - although a rogue condom does sneak its way into the shot. Ansell’s draws show its different condom products alongside handcuffs and make up.

Good Copy tells AdNews: "We were struck by the similarity. Though we're glad Etsy included condoms in their version, too. Safe sex is one idea everyone should use."

Ansell’s ad launched towards the end of 2015, with the tagline ‘we love being in your drawers’. Ansell is an Australian-only brand and the campaign was only used in this market.

Etsy’s campaign launched last week based on the idea ‘Difference Makes us’, featuring both people’s preferences for varying nightstands and mugs. Check out the full campaign here.

When asked for comment on the 'striking similarities', Etsy responded: "Our two original digital ad spots launched on September 14, and were conceived out of Etsy and Office of Baby’s headquarters in the U.S. Etsy’s Difference Makes Us campaign will continue through the holiday season and beyond."

Take a look at the ads below and let us know if you think there has been foul play.