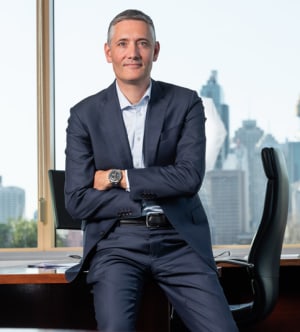 It’s been a difficult period for Isentia since it wrote off its multi-million dollar investment in King Content, but its new CEO Ed Harrison says he’s on track to turn the media monitoring business around.

In August 2017 Isentia shut the content marketing agency due to poor performance after purchasing it for $48 million just two years earlier. More recently, the company’s latest half-yearly results reported a net loss of $22 million, while underlying operating profit was $11 million.

But Harrison, who joined Isentia as CEO and managing director after John Croll’s departure in May last year, says he has three pillars for transforming the business and it’s exactly where he wants it to be.

Harrison joined Isentia after serving as CEO of the now defunct Yahoo7 for four years.
“We're just setting out on a strategy that really sees us change the way we operate and deliver to our clients,” Harrison tells AdNews.

“I saw an opportunity to be involved in that using the experiences I have in designing products, from a technology point of view, and running large sales teams and optimising revenue in an environment that's changing incredibly rapidly.”

The three pillars for this transformation are; creating an efficient operating model, innovating in products and scaling the business.

To improve Isentia’s operating model it has relied on shifting to automation. Just a year ago, 80% of the way Isentia processed and distributed its print content was done by people and 20% by machines.

“We've now flipped that, so 80% of the work on ingesting print and pushing it through our systems to determine what is relevant to a client and then pushing it out to a client is now automated,” he says.

Isentia is looking at other parts of its business to further automate, such as in broadcast where it hopes to automate the manual-heavy process of ingesting broadcast content, writing transcripts and providing those to clients with clips in real-time.

“We've actually already built the technology that allows us to track broadcast channels, so television and radio, and then alert clients in real-time if their brands are mentioned in those broadcasts.”

This shift to automation has impacted Isentia’s headcount, and over time will see the refocus of labour from operational manual work to high-skilled tech work.

The second pillar is introducing new products, such as real-time alerts and improved analytics capabilities.

“You can now go into our platform and cut and dice all of your data really easily,” he says.

“For example, that’s what volumes are you receiving in terms of coverage, who is writing about you specified by geography, on many different dimensions, and by sentiment and really analyse what's really going on in terms of the conversation around your brand.”

The final pillar is scale across Asia, with a majority of its 1,200 employees in the region based in Asia, helmed by the newly appointed CEO for Asia James Merritt.

“Something that's often missed in Australia is the size and scale of our Asia footprint,” Harrison says.

With the full-year results to be released next week, Harrison reflected on the H1 results saying it was a “reasonably successful outcome”.

Currently Isentia operates in 11 markets and holds more than 3,000 clients. Commenting on the recent loss of big clients Telstra, Vodafone and a couple of banks, Harrison says it’s a competitive market.

“We have people coming back to us who have maybe been away for some time as well. That's just the cut and thrust of business. So, it's not surprising to us at all that occasionally people want to try a different solution and then we really expect that over a period of time, we'll have the opportunity to bring them back in.”