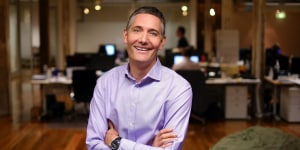 The firm has also revealed its current CFO James Orlando is stepping down from his role, but will remain with the company until a replacement could be found.

Harrison was made redundant earlier this year following the decision by Seven West Media to split from Yahoo7, selling its 50% stake in the company to Oath.

In a statement to the ASX, Harrison's $676,000 salary was revealed, with the new boss also offered the same amount in equity.

He will commence in the role 6 August.

Harrison replaces John Croll who resigned from the role in February and left in May.

Last year Isentia was forced to write off its $35m+ investment in branded content agency King Content, but Harrison has addressed the difficulties the company is currently facing.

"Like many organisations, Isentia is facing a number of challenges associated with the rapidly changing media landscape," Harrison says.

"I look forward to working with the team to drive an innovation, digital and product focus growth agenda."

Harrison has more than 25 years of experience in print, outdoor and digital in Australia, New Zealand and the UK. Prior to Yahoo7, he held the role of group sales director at Fairfax media.