Droga5's Steve Coll to join WiTH Collective in partner role 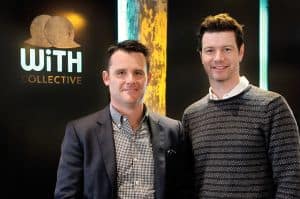 After news this morning that Droga5's executive creative director was departing the agency, Steve Coll has already reappeared at WiTH Collective.

Coll will take up the role of partner and chief creative officer at the Sydney-based agency, overseeing clients such as Fairfax, Qantas, Pfizer, and Colonial First State to name a few on its books.

Justin Hind, CEO of WiTH Collective said the hire is a wonderful boost for the agency. “We established WiTH Collective to help answer real business problems for our clients in the most creative, collaborative and measurable way possible,” he said.

“We believe we’re doing that by embracing data and digital technology in a way that few of our competitors can. In Steve, we’ve hired a first-class creative leader with a reputation for producing campaigns that help transform client’s business. That’s a perfect fit with our culture and a great precursor to our next step.”

In total, he has won more than 20 Cannes Lions and a Black Pencil at D&AD. He is also the only creative to have been invited to join the board of ADMA.

Coll said that WiTH Collective is a great place to realise the opportunities of the rapidly changing industry landscape.

“The future will be won by those brands who know and communicate with customers in the most creative, personal and measurable ways and I know WiTH Collective has their sights set well and truly on that space. I’m also a huge believer in collaboration, a belief I share wholeheartedly with Dominique and Justin. The fact they chose the name WiTH says it all. I couldn’t be more excited about this next step and am looking forward to working with the whole team, and continuing the considerable success WiTH Collective has enjoyed to date.”

With Coll's departure from Droga5 also comes news that Droga5 figurehead and creative chairman, David Nobay, is coming back to the agency full-time.

Speaking with AdNews, Nobay said: “After 20 years as an executive creative director in Sydney, New York and London, I was itching to try some things outside the immediate industry. However, what Sudeep, David Droga and I also acknowledged this year, is that it’s also impossible to be half-pregnant. The business is moving and changing too quickly to not be across every part of it. You’re either 100% out or 100% in. I chose the latter.”