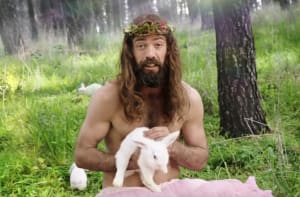 An ad featuring a hairy fairy and Volkswagen have all been called into question in the latest rulings from the Advertising Standards Bureau (ASB).

A campaign from the Motor Accident Commission SA saw the kookiest complaint for its spot featuring a bearded man in a tutu – the Hairy Fairy.

In the ad, the Hairy Fairy sits in a forest surrounding by white rabbits talking about speeding leading to “hairy situations”. He then appears in the backseat of a car and encourages a woman to slow down. When she does he lifts up his tutu in celebration.

One complainant says the ad “plays on the general public’s dislike of hairy guys”, and is degrading to men as well as some people’s religious beliefs.

“The tutu fairy as depicted in the ad is very like the religious portrayal of Jesus as the good shepherd in the Christian belief. I find it very disrespectful to use this image and add the tutu,” the complainant said.

The ASB ruled that the advertisement was not offensive to gay men, hairy people or fairies.

Volkswagen has made it into viewers’ bad books twice in November, for two separate adverts.

The first ad has been accused of portraying “child abuse” and “neglect”, for showing a couple enjoying their time in the car so much they forget their daughter was in the back seat.

The complainant said: “Considering the amount of child abuse and neglect that is prevalent in our society, these days should we really be using neglect of a child in a so called amusing and dismissive way just to sell a car? I find this ad very offensive.

“The advertisement is extremely disturbing considering the amount of children that have accidentally been left in vehicles and have been seriously injured or have died as a result.”

The second spot shows ordinary drivers battle it out on the race track, which one person said promoted the breaking of road rules.

Despite the Volkswagen backlash, the ASB sided with the car company and dismissed both complaints.