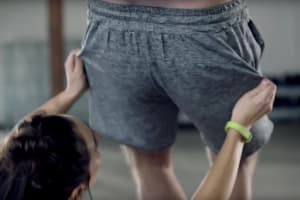 Hamish Blake’s bottom has been accused of being “offensive” and “degrading” in the latest Bonds ad with wife and Instagram influencer Zoe Foster Blake.

In the TV commercial the couple go head-to-head in their activewear – skipping, punching and twerking. During one of the scenes, Zoe pulls down the radio personality's pants and the viewer sees his Bonds underwear as he continues to do chips ups.

One complainant believes the ad objectifies men and presents Hamish Blake as a sexual object to the viewers.

“If the roles were reversed and a male removed a female’s pants and smacked her bottom just because she beat him in an exercise routine, it would be considered sexist and offensive while objectifying and degrading her,” says a complainant.

Pacific Brands, which owns Bonds, responded by saying the rivalry between Hamish and Zoe was filmed in a “friendly, respectful and fun content” and the scene does not intend to show Hamish was dacked because of his gender.

The Advertising Standards Bureau (ASB) dismissed the case, adding there was no nudity in the TV spot and it did treat the issue of sex, sexuality and nudity with sensitivity.

In the first case since the new wagering code was enforced, which prevents advertising to minors, showing people place a bet while drinking, or link gambling with sexual success, the ASB has dismissed a complaint about a William Hill commercial.

In the ad, a female presenter on screen starts to talk about a betting “special offer”. A male then walks into the frame and queries whether the “special offer” is as special as a money back offer. The male then goes to explain the offer and taps his mobile phone and the background changes to the “William Hill world”.

A complainant regarding the advertisement says: “I object because it ‘infers’ that you can’t lose! Gambling is a bad enough problem in this country without this but it’s giving vulnerable pople the idea when you bet, you pretty much can’t lose.”

William Hill rejected the assertion the spot states you can’t lose from wagering, adding it is part of a comparative advertising campaign to communicate the money back promotions differ for its competitors.

The board rules the ad did not claim viewers will win and therefore does breach the newly instated wagering code.