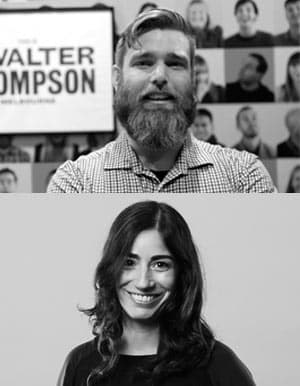 It's all about the work and Creative Choice is where we send in the pros to critique the latest offerings from ad land.

JL:This week’s Creative Choice has it all. We’ve got big brands trying t reinvent themselves, moody European car spots and someone eating a sandwich. I wasn’t convinced the Subway work had an affect on me, but now I’m not so sure.

CS: This is like the opposite of Cannes. Not in quality, but how it’s presented. Instead of case studies fleshing out campaign architectures/results, I’m watching launch films. Volvo ‘s national campaign, Subway’s new brand platform, Vodafone starting a movement. It feels full of possibility.

JL: I wonder if the punter at home will find the “we’re listening to you” message, credible enough here. I’m not sure they’ve quite forgotten #Vodafail yet. When you remind people of the things they hate about telcos, are you also reminding them how much they dislike you? Can a big telco really position itself as the people’s champion when they’ve spent so long proving the opposite? When you tell the world that you’re listening, will that just invite those who don’t feel listened to, to go for your throat? Only time will tell. That said, tiny little protest signs, cutesies.

CS: This is different. And different is good. This will get attention. And by capturing eyes and ears, the brand can move to a dialogue with its consumers. It feels like the launch of a movement, which hopefully ends with a big telco delivering products based on what customers want. Like NAB’s Break Up, it feels like it could be one of those campaigns that change the industry. Let’s see what comes next. As an ad, it’s a great start.

JL: Not sure I buy into this. Really, who goes for a run after smashing a meatball foot long? Does mountain biking go with turkey melts? Will an all-you-can-meat sandwich give me the fuel I need to do stuff and whatnot? I’m not convinced. I’m also not convinced in the use of neuroscience to extrapolate an insight if it leads to work that feels like it was created by science, sans humans. I get the whole fuel to do things shtick, but this all feels a little disconnected, uninspired and I don’t see the pay-off. The tag line seems like it was computer generated. But hey, so was Avatar.

CS: It’s a good line, great idea for a campaign. The launch ad could be stronger though, but I suspect this is just it, a launch ad. Like when the client likes the mood reel so much it ends up on TV. But I won’t make the mistake of judging a campaign by its TV ad. As a comms platform, the idea of food being fuel and good food being good fuel for life – works really well - perfect for Subway. It opens up a number of creative possibilities in experiential and social. I look forward to seeing where and how far the agency will take this concept.

JL: This spot makes me feel like NRMA truly get the difference between a house and a home and thus how important it is to protect it. While this isn’t the newest idea, it’s executed with warmth and conviction and the spot does have a great look to it. Hats off to the client for staying away from too many cliché ‘home’ moments, however thumbs down for ruining a great track, but that’s a personal beef.

CS: I can’t help but feel a bit bummed with this ad. Not because I don’t like it, but because I could have loved it. The strategy is not amazing, a bit too close to what Allianz is doing right now. And of course, there’s nothing outstandingly new in a super cut of family scenes. But sometimes all you need is the right music, a song with lyrics that changes the meaning of every scene, that takes a common edit and takes it to the next level. What makes this ad uncomfortable is that it has the perfect song, Home. It would have been just great but for some reason the lyrics were changed, and it all went back to being … normal. It’s a shame, it was so close to great.

4. In the Matrix - AHM Health Insurance

JL: Simplifying the overcomplicated, what’s wrong with that? Especially if you get to smash a coffee table during the process. This spot appeals to the “can’t be stuffed, just make it easy” mentality most of us can relate to. Don’t tell me too much about your product benefits just smash a coffee table and tell me I don’t have to think too hard. Thanks TV. Did I mention I like the coffee table bit?

CS: I love this. It made me smile and consider switching to AHM. With all the magic of digital campaigns, the quirky ideas that fuel social media, and the powerful truth of experiential campaigns, it’s harder and harder for TV to stand out. But this ad is fun and will be effective. Strategically, it nails a difficult brief. It deals with a real-life problem for anyone doing research on health insurance plans, the virtual vortex of information overload. And it does it with charm and a bit of fun, while not forgetting to deliver the sales pitch.

JL: I dig the whole Made by Sweden thing. It makes Volvo seem cool. Though saying that, I much prefer previous incarnations of this campaign. The moodiness of past spots conveyed a strong sense that Volvo comes from a dark and mysterious land and I find the whole thing pretty darn intriguing. However, I feel a little of that intrigue is lost here. But whatever … another cool addition to an already cool campaign. Is it cool to say cool anymore?

CS: Traditionally, on the global stage, Volvo’s campaigns are always disruptive, unexpected, innovative and unforgettable – true feats of creativity. So I watched this video expecting something between ‘Life Paint’ and ‘Epic Split’. It’s not. There’s not much of an idea here. But putting aside the international context, there’s some really nice craft in there. Beautiful scenes and gorgeous music make this ad pleasant and more memorable than most Australian car ads these days.

JL: This work is just another example of Clems and NAB just getting it. Getting the people they talk to. Getting how to get those people to engage. Getting something heart-warming out of it. I don’t like the spot though. I think it’s a bit naff but I love the idea and look forward to seeing where the Fan Shakes work will lead.

CS: When you have a sound strategy, good creative comes naturally. With the amount of sports sponsorship related campaigns in Australia, it is really difficult to find something new to talk about, something unique for a brand to own. I love the fact that NAB, through this campaign, has decided to own the banter – which is, in itself, an official Australian sport. It’s great. It’s fun and it makes me want to see more of it.