Compare ad rates from 1956 to today 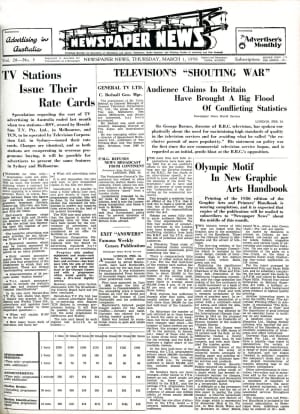 Back in 1956 ad rates were very different. When television was first introduced a 60-second ad spot, to run once on TV, would cost an advertiser £60. To run it 260 times would cost £49 a go.

The rates are in pounds, because TV came in 10 years before Australia switched from using the British Pound, shillings and pence to introducing the decimal Australian Dollar.

Crunching that through the online pre-decimal inflation calculator, in today's money £60 is the equivalent of $1,864.95.

Brands could also 'sponsor' sessions – with an hour of TV time costed at £200.

Compare that to now – and it's a very different landscape. Ballpark figures for buying straight ad spots now from some of Australia's media networks varied.

Although, it's obvious to note that the landscape is much more complex these days. It's not just about spots and dots and and there are the complications of upfront deals and all that comes with them.

There's also the increasing tendency towards integrations, particularly with tent-pole shows such as The Bachelor, Survivor, The Block or Masterchef. All of which have deals with brands to include products within programming or contextual ads in breaks – not just spots and dots.

Sponsorships are much harder to value as the levels of integration vary, as does the run of the season and a multitude of other factors.

Speaking to AdNews, one of the media agencies also noted that while penetration of TV sets in homes would have been lower, the audience share for TV back in the early days of television would have been much higher without the competition of digital and other mediums.

So while we wholehearted embrace and celebrate the innovations and developments the industry has made in the last 60 years, I’m sure media buyers and TV networks alike can spend a moment reminiscing the simplicity of yesteryear when you could call your guy over at the TV network, buy a spot for £60 or a programme session for £200, sit back, put your feet on the desk and decide where to go for a four-hour lunch. Job done.

Click the image to read the 1956 front page on ad rates. Check out some more from the archives from the beginning of TV.